Using high-resolution data from the joint NASA-U.S. Geological Survey Landsat program, researchers have created the first map of the causes of change in global mangrove habitats between 2000 and 2016 – a valuable tool to aid conservation efforts for these vital coastline defenders.

Mangroves are hardy trees and shrubs that grow in the salty, wet, muddy soils of Earth’s tropical and subtropical coastlines. They protect the coastlines from erosion and storm damage; store carbon within their roots, trunks, and in the soil; and provide habitats for commercially important marine species. The study showed that overall, mangrove habitat loss declined during the period. However, losses from natural causes like erosion and extreme weather declined more slowly than human causes such as farming and aquaculture. For conservation and resource managers trying to prevent loss or re-establish new habitats, this finding highlights the need for strategies that account for natural causes of loss.

The global map will benefit researchers investigating the carbon cycle impacts of mangrove gain and loss, as well as help conservation organizations identify where to protect or restore these vital coastal habitats. 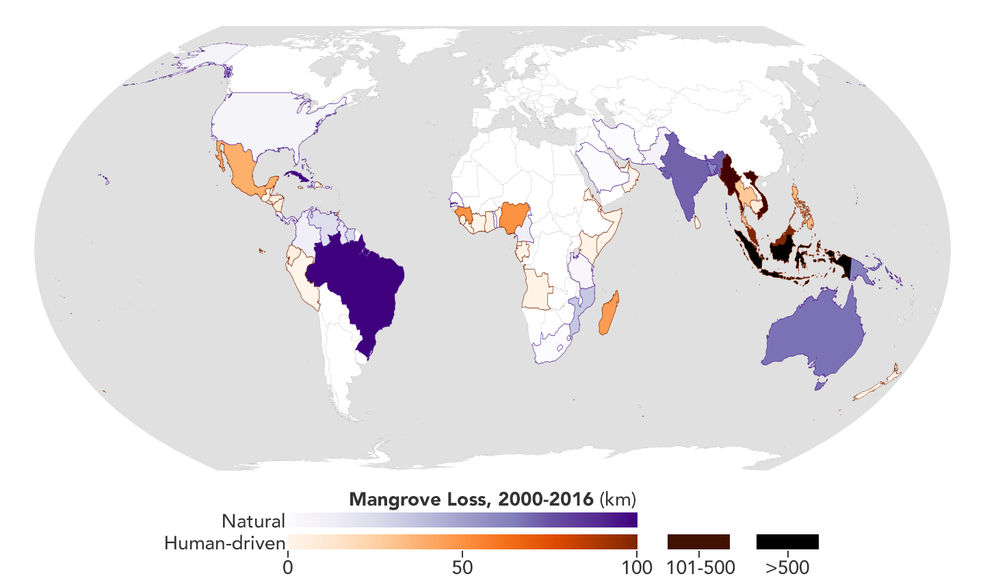 This map shows the location and severity of mangrove habitat loss, measured in kilometers, caused by natural and human drivers from 2000 to 2016. Darker areas experienced more loss in the period.
Credits: NASA Earth Observatory/Joshua Stevens

In 2010, mangroves covered about 53,000 square miles of Earth’s coastlines, straddling the line between salt water and muddy soil with their long, stilt-like root systems. The majority of these ecosystems are found in Southeast Asia, but they exist throughout the tropical and subtropical latitudes over the globe.

These hardy trees and shrubs provide a “triple whammy” of environmental benefits, said Lola Fatoyinbo Agueh, an environmental scientist at NASA’s Goddard Space Flight Center in Greenbelt, Maryland. Mangroves are uniquely efficient carbon sinks: locations where carbon is stored out of the atmosphere. They make up only 3 percent of Earth’s forest cover, but if they were all cut down, they could contribute up to 10 percent of global carbon emissions. Adapted to withstand salty water, strong tides, low-oxygen soils and warm tropical temperatures, mangroves protect the coastlines from erosion and storm surges and provide a “nursery” for marine creatures.

“Mangroves provide shoreline protection from extreme storms and tidal waves,” said Fatoyinbo. “Because they are amphibious trees, their root structure protects the inland areas from the coast, and they also protect the coast from the inland areas, because they’re able to accumulate a lot of the soil that comes in from upstream or from the coast. They hold that sediment in their roots and essentially grow new land. If you have areas where you have increased erosion due to sea level rise, mangroves might counter that.”

Mangroves have been threatened by deforestation for decades, as agriculture and aquaculture, urban development and harvesting have caused the loss of more than a quarter of mangrove forests in the past 50 years. Forests in Southeast Asia have been especially hard-hit, as countries like Indonesia clear mangroves to make room for shrimp and rice farming.

When planning conservation or restoration efforts for these crucial forests, experts need to know what the primary human and natural threats are for their area. Using high-resolution imagery from Landsat 5, 7 and 8, Fatoyinbo and her colleagues used machine learning algorithms to create a high-resolution map of mangrove losses between 2000 and 2016, with an important addition: They showed what drove those losses.

The team found that nearly 1300 square miles of mangrove forests were lost during the study period, or about 2 percent of global mangrove area. Sixty-two percent of the lost area was due to human causes, mainly farming and aquaculture. The rest was due to natural causes, including erosion and extreme weather events.

Over the period, both human and natural drivers of loss declined, the team said. But human impact declined more quickly.

“On the one hand, it’s great,” said lead author Liza Goldberg, a NASA Goddard intern and rising freshman at Stanford University. “It shows that conservation efforts are increasing in effectiveness on a local scale, and there’s an increase in awareness of the importance of mangroves, economic damage from storms, and loss of life. But on the flip side, the decline in losses, especially in Southeast Asia, means that in many areas, there are simply no more mangroves to lose.”

Between 2000 and 2016, both natural and human causes of mangrove habitat loss declined, but natural causes like erosion and storms declined more slowly than human causes. In some cases, this was due to successful conservation efforts, but in others, because “there are simply no more mangroves to lose,” said lead author Liza Goldberg.
Credits: NASA Earth Observatory/Joshua Stevens

While natural drivers of loss also decreased, they did so more slowly, the team said. This shift in the proportion of loss drivers poses challenges for conservation and resource managers.

“The main takeaway is that conservation and restoration efforts should continue to increase their focus on evaluating and mitigating natural threats,” Goldberg said.

Besides their role in stabilizing coastal ecosystems, mangroves are vital to Earth’s carbon cycle – the exchange of carbon between the land, ocean, atmosphere and living things. Their leaves fall to the soil and decompose very slowly, creating carbon-rich peat instead of releasing it back into the atmosphere. When these trees and shrubs are cut down or destroyed by storms or floods, that carbon instead escapes into the atmosphere, where it contributes to climate change as a greenhouse gas.

“The type of carbon emissions you’ll see from mangroves depend on what type of conversion is happening,” said Fatoyinbo. “If you’re doing clear-cutting and digging up the soil where most of the carbon is stored to put in a shrimp pond, that will have a very different rate of emission from, let’s say, a tropical storm that comes in and damages standing trees, but where you might have regrowth happening afterwards.”

The team is collaborating with nonprofit and other organizations to put their data to work, helping with carbon emissions estimation, conservation planning and other initiatives to protect these ecosystems for future generations.

Goldberg began working with Fatoyinbo and David Lagomasino when she was just 14, starting with basic lab tasks and advancing quickly to writing her own analysis codes for mangrove data. She recently completed her senior year of high school at Atholton High School in Maryland and will begin undergraduate studies at Stanford University this fall.

“Working with Liza has been really amazing. She’s very inspiring,” said Fatoyinbo. “We had a lot of discussion with her and large international organizations that are interested in mangroves, and when we asked what would help them better implement their policies and procedures, we kept hearing about needing better change maps and better understanding what the drivers of change are. Liza took that and ran with it.”

Goldberg plans to continue partnering with Fatoyinbo’s team during her undergraduate studies.

“It’s been an honor to work with Lola and her team for the last couple of years,” Goldberg said. “It’s rare to find an environment where people are so supportive regardless of your age and level of expertise, and it’s been invaluable for my own research as I go into college. This environment is unique to NASA and to Goddard.”

SPACE OUT THIS SUMMER

Rocket to the Moon: What Is the Exploration Upper Stage?

As The Kids Go Back, It’s Time To Think Seriously About Your Business