Edgy Metal, based on the North East coast of England, is celebrating three successful years in business this New Year. Drawing inspiration for his designs from Whitley Bay’s stunning coastline, Pete Noble has sent his edgy designs to Japan, Hawaii and Canada since starting his business back in 2016.

Originally from Cumbria, Pete Noble moved to Whitley Bay in 2010. He was working as a calibration technician but started making silver jewellery in his spare time.

Pete said: “I’ve always been a practical, hands-on kind of person. I’ve worked in various roles since I was 14, and I’ve always enjoyed making things and inventing solutions for everyday problems.”

The first piece of jewellery Pete ever made was a necklace for his wife, shortly after their first child was born, in 2011. Still designing jewellery as a hobby, Pete’s first design was strewn with emotions and meaning. Having asked his wife to marry him inside one of the Egyptian pyramids, Pete drew inspiration from the Egyptian culture for the piece.

“The pendant was made up of Egyptian and Roman symbols and the necklace was set with a triangular Tsavorite Garnet, the birthstone of my wife and daughter. The shape is significant because the triangle is the symbol of femininity. Finally, the whole design is symbolic of the three of us holding on to each other,” Pete continued.

The success of this first piece spurred Pete on to design more jewellery with a story and, when he was made redundant during Christmas 2015, he decided to invest all of his time and energy into building Edgy Metal into a full-time business.

“The redundancy provided me with the opportunity to explore a number of designs I’d been thinking about for a while. The Unbroken Heart was a pendant that I’d wanted to produce for a few months, so I set about designing a prototype of that and launched Edgy Metal on New Year’s Day, 2106. Since that time, I haven’t looked back and have more than doubled my catalogue of products from around 21 to 57.

“The Unbroken Heart is still my most popular piece of jewellery. It’s a pendant inspired by the story of a broken heart. It’s a reminder that broken hearts can mend – they become unbroken – and why not mend them with gold stitches? I’ve been told that the story behind the Unbroken Heart resonates with a lot of my customers because they want their jewellery to have meaning and reflect their own stories.”

During the three years that Pete has been designing and making jewellery full-time, he’s received commissions from all over the world, including Canada, Hawaii and Japan.

“All of my jewellery can be posted so I’m lucky that I’m not restricted to selling to the local area – in fact, I sell more jewellery throughout the rest of the UK and abroad than I do in my own area,” said Pete.

Pete works mostly with Sterling silver and designs bold, chunky jewellery inspired by emotions, family and nature. He plans to expand his catalogue of products with at least two new designs during 2019 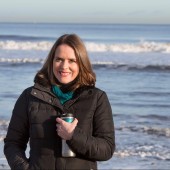 Businesses pursuing work made at EMCON 2018