REDFACES have announced a new set of spring live dates. The Sheffield 4-piece will play several festival appearances including Liverpool’s Sound City and Newcastle’s Hit The North (full list of dates below). The band recently released a new single ‘Messed Up Feeling’. Recorded at Miloco’s The Pool in London and produced by Carey Willetts (Athlete), it’s a driving, monster of a song, with nods to their RnB influences – the groove landing somewhere between Kasabian and Michael Jackson, bass guitar and drums pushed right to the front of the mix. Chosen by NME as one of their essential picks for 2018, the year is already shaping up to be a busy one for the band. Previous single ‘Take It Or Leave It’ was chosen as BBC Radio 1’s ‘Introducing Track Of The Week’ and MTV marked them out as a ‘One To Watch’. RedFaces are Harry Lyon, Isaac White, Charlie Yapp and Ryan Laycock. Four lads from Sheffield treading what was once a well-worn path, these days the road less travelled. The journey started at 2Fly studios in Sheffield, recording demos with Alan Smyth. Taking their influences from the 50s and 60s right through to today, by way of The Beatles, Hendrix, The Smiths and The Strokes. 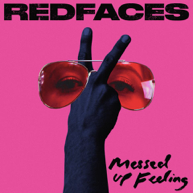