‘Forever’ follows the previously released ‘Hanging On Your Hinges’ and ‘Do Ya Feel My Love?’, which received widespread national radio support added to A lists across all key networks, and has now received over 2 million streams across all platforms.

As Stereophonics celebrate over a quarter-century as one of the key cornerstones of British rock, they return with ‘Forever’ — a track that oozes with glistening guitar and sweeping vocal melodies, paired with romantic storytelling.  A reflective track that evokes freedom and the open road, the bridge builds to a euphoric chorus where frontman Kelly Jones is heard bellowing “I wish I could fly away forever, I wish I could take away the pain from you and release you”. Letting go is felt in the heights of his singing, as much as it is when Kelly puts pen to paper.

Of the new track, Kelly says: “‘Forever’ is about escapism. It’s about seeking freedom, which really felt like it chimed with what a lot of people are feeling and living through at the moment. We’re at a time when we’re limited in our actions with what we can and can’t do. There’s nostalgia attached to that, and a longing for times that were better — there’s a personal story and a lot of emotions wrapped up within that”.

‘Forever’ is the third single released from Stereophonics’ new LP ‘Oochya!’ released on 4th March. The album calls upon certain tones, feelings and themes that’ll resonate with fans young and old alike.  Kelly Jones explains: “It’s quite an emotional record. At times it’s very nostalgic. The whole album is melodic. You put it on and it’s one of those albums you don’t really want to turn off because it keeps going onto different styles and the songs hold your attention. It shows a lot of styles of the band”.

The release of ‘Oochya!’ will also see the Welsh rockers return to the road for what’s sure to be another eagerly anticipated sold out UK Arena tour. Kicking off at Manchester Arena on 18th March 2022, the 11 date tour reaches The O2 London on 1st April and culminates at The Birmingham Resorts World Arena on 2nd April.

The band will also headline 2 nights at Cardiff’s 60,000 capacity Principality Stadium on 17th and 18th June with very special guests Tom Jones and Catfish & The Bottlemen.

Alongside the new music, Kelly recently sat in for BBC Radio 2’s Johnnie Walker for his widely celebrated The Rock Show with Johnnie Walker, which can be listened back to here.

All songs written by Kelly Jones. ‘Oochya!’ was produced by Kelly Jones with Jim Lowe and George Drakoulias and recorded at The Distillery, Wiltshire.

Tickets on sale now at  https://stereophonics.com/tour/ 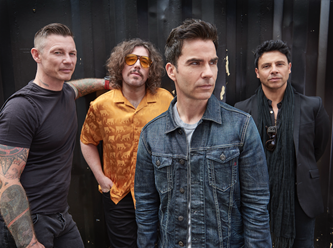