The only visual record of the historic Apollo 11 landing is from a 16mm time-lapse (6 frames per second) movie camera mounted in Buzz Aldrin’s window (right side of Lunar Module Eagle or LM). Due to the small size of the LM windows and the angle at which the movie camera was mounted, what mission commander Neil Armstrong saw as he flew and landed the LM was not recorded. The Lunar Reconnaissance Orbiter Camera (LROC) team reconstructed the last three minutes of the landing trajectory (latitude, longitude, orientation, velocity, altitude) using landmark navigation and altitude call outs from the voice recording. From this trajectory information, and high resolution LROC Narrow Angle Camera (LROC NAC) images and topography, we simulated what Armstrong saw in those final minutes as he guided the LM down to the surface of the Moon. As the video begins, Armstrong could see the aim point was on the rocky northeastern flank of West crater (190 meters diameter), causing him to take manual control and fly horizontally, searching for a safe landing spot. At the time, only Armstrong saw the hazard; he was too busy flying the LM to discuss the situation with mission control.

After flying over the hazards presented by the bouldery flank of West crater, Armstrong spotted a safe spot about 500 meters down track where he carefully descended to the surface. Just before landing, the LM flew over what would later be called Little West crater (40 meters diameter). Armstrong would visit and photograph this crater during his extra-vehicular activity (EVA). Of course, during the landing, Armstrong was able to lean forward and back and turn his head to gain a view that was better than the simple, fixed viewpoint presented here. However, this simulated movie lets you relive those dramatic moments. 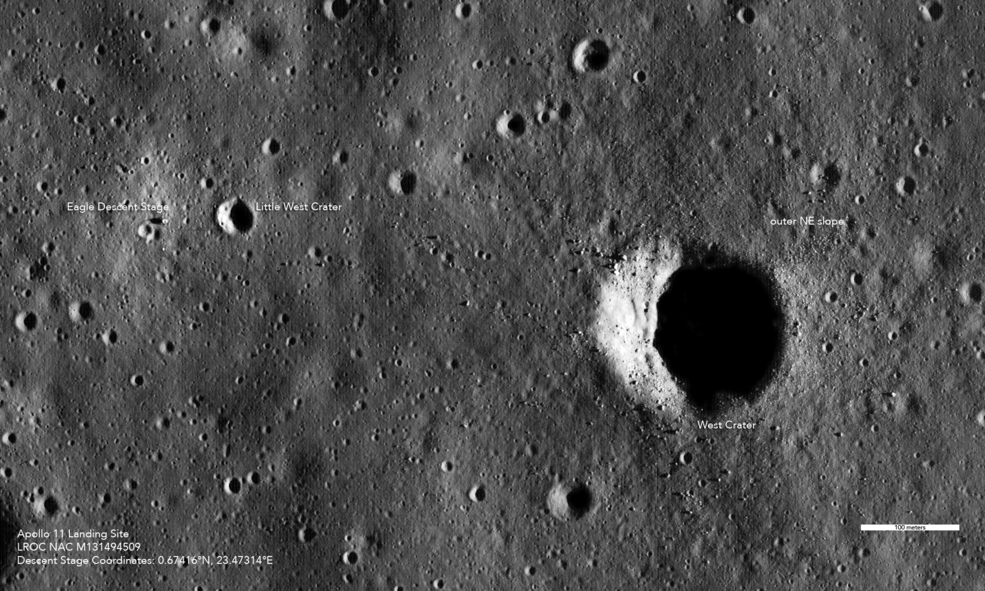 In this image, the Lunar Module descent stage and astronaut tracks are clearly visible — something Armstrong did not see during the landing. The incidence (solar) angle on the Narrow Angle Camera image is within a degree as when Apollo 11 landed (just after sunrise), so you see the same dramatic shadows.
Credits: NASA/Goddard/Arizona State University

How accurate is our simulated view? We reconstructed the view from Aldrin’s window from our derived trajectory, and you can view it side-by-side with the original 16mm film. You be the judge!

This video compares film from the landing of Apollo 11 (left) with a simulated reconstruction (right) based on data from NASA’s Lunar Reconnaissance Orbiter.
Credits: NASA/Goddard Space Flight Center/Arizona State University

ACKNOWLEDGMENT: A time-synchronized version of the original 16mm film (Apollo Flight Journal) and the First Men on the Moon website, which synchronizes the air-to-ground voice transmission with the original 16mm film, greatly aided the production of this work. These sources were played side-by-side with our reconstruction during its production, allowing us to better match the reconstruction to the 16mm film and altitude callouts.

Soyuz Heads to the Launch Pad in Black and White

NASA Gets a Rare Look at a Rocky Exoplanet’s Surface