Sometimes nicknames turn out to be closer to reality than you might imagine.

NASA’s Hubble Space Telescope captured a striking image of a fledgling star’s unseen, planet-forming disk casting a huge shadow across a more distant cloud in a star-forming region – like a fly wandering into the beam of a flashlight shining on a wall.

The young star is called HBC 672, and the shadow feature was nicknamed the “Bat Shadow” because it resembles a pair of wings. The nickname turned out to be surprisingly appropriate: Now, the team reports that they see the Bat Shadow flapping!

“The shadow moves. It’s flapping like the wings of a bird!” described lead author Klaus Pontoppidan, an astronomer at the Space Telescope Science Institute (STScI) in Baltimore. The phenomenon may be caused by a planet pulling on the disk and warping it. The team witnessed the flapping over 404 days.

But what created the Bat Shadow in the first place? 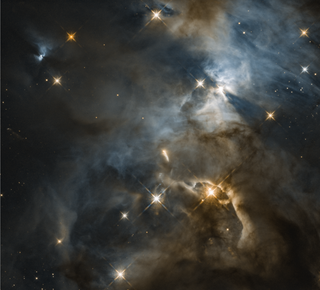 Astronomers using Hubble previously captured a remarkable image of a young star’s unseen, planet-forming disk casting a huge shadow across a more distant cloud in a star-forming region. The star is called HBC 672, and the shadow feature was nicknamed the “Bat Shadow” because it resembles a pair of wings. The nickname turned out to be unexpectedly appropriate, because now those “wings” appear to be flapping!
Credits: NASA, ESA, and STScI 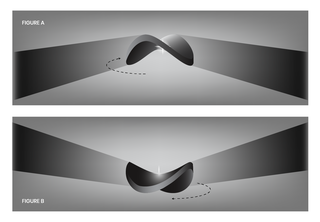 This illustration shows a fledgling star surrounded by a warped, saddle-shaped disk with two peaks and two dips. A planet embedded in the disk, inclined to the disk’s plane, may be causing the warping. As the disk rotates around the young star, it is thought to block the light from that star and cast a varying, flapping shadow on a distant cloud.
Credits: NASA, ESA, and A. James and G. Bacon (STScI)

“You have a star that is surrounded by a disk, and the disk is not like Saturn’s rings – it’s not flat. It’s puffed up. And so that means that if the light from the star goes straight up, it can continue straight up – it’s not blocked by anything. But if it tries to go along the plane of the disk, it doesn’t get out, and it casts a shadow,” explained Pontoppidan.

He suggests imagining a lamp with a shade that casts a shadow on the wall. In this case, the lightbulb is the star, the lampshade is the disk, and the cloud is the wall. Based on the shadow’s shape, the disk must be flared, with an angle that increases with distance – like bell-bottom pants, or a trumpet.

The disk – a circling structure of gas, dust, and rock – might be roughly saddle-shaped, with two peaks and two dips, which would explain the “flapping” of the shadow. The team speculates that a planet is embedded in the disk, with an orbit inclined to the disk’s plane. This planet would be the cause of the doubly warped shape of the orbiting disk and the resulting movement in its shadow.

“If there were just a simple bump in the disk, we’d expect both sides of the shadow to tilt in opposite directions, like airplane wings during a turn,” said team member Colette Salyk of Vassar College in Poughkeepsie, New York.

The shadow, extending from the star across the surrounding cloud, is so large – about 200 times the length of our solar system – that light doesn’t travel instantaneously across it. In fact, the time it takes for the light to travel from the star out to the perceivable edge of the shadow is about 40 to 45 days. Pontoppidan and his team calculate a planet warping the disk would orbit its star in no fewer than 180 days. They estimate that this planet would be about the same distance from its star as Earth is from the Sun.

If not a planet, an alternative explanation for the shadow motion is a lower-mass stellar companion orbiting HBC 672 outside the plane of the disk, causing HBC 672 to “wobble” relative to its shadowing disk. But Pontoppidan and his team doubt this is the case, based on the thickness of the disk. There is also no current evidence for a binary companion.

The disk is too small and too distant to be seen, even by Hubble. The star HBC 672 resides in a stellar nursery called the Serpens Nebula, about 1,400 light-years away. It is only one or two million years old, which is young in cosmic terms.

This finding was serendipitous. The first image of the Bat Shadow was taken by another team. Later, the image was slated for use in NASA’s Universe of Learning, a program that creates materials and experiences to enable learners to explore the universe for themselves. The goal was to illustrate how shadows can convey information about phenomena invisible to us. However, the original team only observed the Bat Shadow in one light filter, which did not provide enough data for the color image desired by NASA’s Universe of Learning.

To get the color image, Pontoppidan and his team had to observe the shadow in additional filters. When they combined the old and new images, the shadow appeared to have moved. At first, they thought the problem was in the image processing, but they quickly realized the images were properly aligned and the phenomenon was real.

The team’s paper will appear in an upcoming edition of the Astrophysical Journal.

The Hubble Space Telescope is a project of international cooperation between NASA and ESA (European Space Agency). NASA’s Goddard Space Flight Center in Greenbelt, Maryland, manages the telescope. The Space Telescope Science Institute (STScI) in Baltimore conducts Hubble science operations. STScI is operated for NASA by the Association of Universities for Research in Astronomy, in Washington, D.C.

For images, video, and more information about this study and Hubble, visit: