After more than 16 years studying the universe in infrared light, revealing new wonders in our solar system, our galaxy, and beyond, NASA’s Spitzer Space Telescope’s mission has come to an end.

“Spitzer has taught us about entirely new aspects of the cosmos and taken us many steps further in understanding how the universe works, addressing questions about our origins, and whether or not are we alone,” said Thomas Zurbuchen, associate administrator of NASA’s Science Mission Directorate in Washington. “This Great Observatory has also identified some important and new questions and tantalizing objects for further study, mapping a path for future investigations to follow. Its immense impact on science certainly will last well beyond the end of its mission.”

Among its many scientific contributions, Spitzer studied comets and asteroids in our own solar system and found a previously unidentified ring around Saturn. It studied star and planet formation, the evolution of galaxies from the ancient universe to today, and the composition of interstellar dust. It also proved to be a powerful tool for detecting exoplanets and characterizing their atmospheres. Spitzer’s best-known work may be detecting the seven Earth-size planets in the TRAPPIST-1 system – the largest number of terrestrial planets ever found orbiting a single star – and determining their masses and densities.

In 2016, following a review of operating astrophysics missions, NASA made a decision to close out the Spitzer mission in 2018 in anticipation of the launch of the James Webb Space Telescope, which also will observe the universe in infrared light. When Webb’s launch was postponed, Spitzer was granted an extension to continue operations until this year. This gave Spitzer additional time to continue producing transformative science, including insights that will pave the way for Webb, which is scheduled to launch in 2021.

“Everyone who has worked on this mission should be extremely proud today,” Hunt said. “There are literally hundreds of people who contributed directly to Spitzer’s success, and thousands who used its scientific capabilities to explore the universe. We leave behind a powerful scientific and technological legacy.” 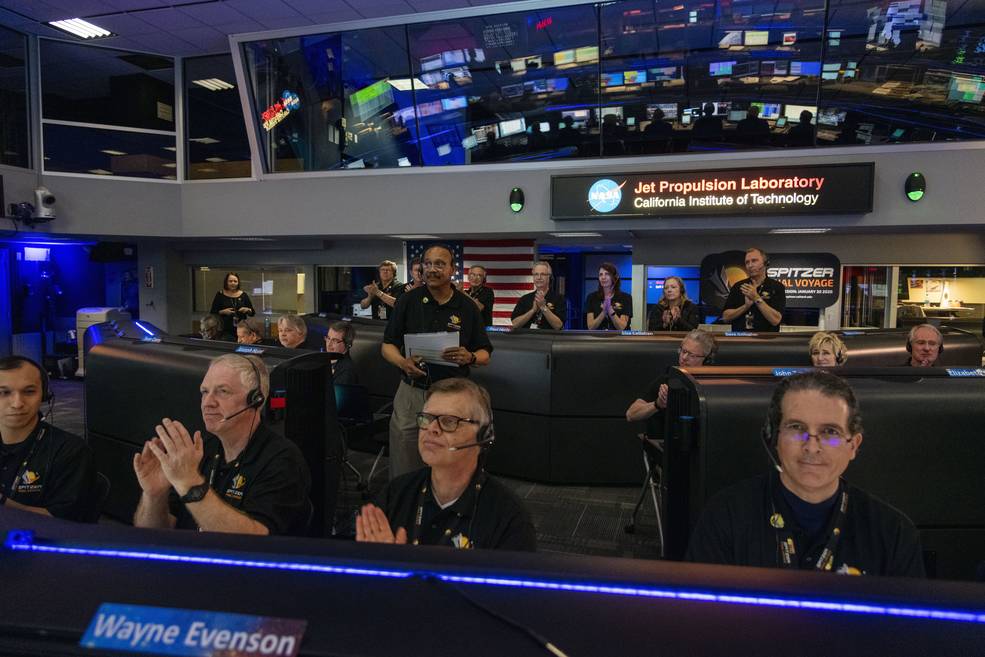 Though it was not NASA’s first space-based infrared telescope, Spitzer was the most sensitive infrared telescope in history when it launched, and it delivered a deeper and more far-reaching view of the infrared cosmos than its predecessors. Above Earth’s atmosphere, Spitzer could detect some wavelengths that cannot be observed from the ground. The spacecraft’s Earth-trailing orbit placed it far away from our planet’s infrared emissions, which also gave Spitzer better sensitivity than was possible for larger telescopes on Earth.

Spitzer’s prime mission came to an end in 2009, when the telescope exhausted its supply of the liquid helium coolant necessary for operating two of its three instruments – the Infrared Spectrograph (IRS) and Multiband Imaging Photometer for Spitzer (MIPS). The mission was deemed a success, having achieved all of its primary science objectives and more. But Spitzer’s story wasn’t over. Engineers and scientists were able to keep the mission going using only two out of four wavelength channels on the third instrument, the Infrared Array Camera (IRAC). Despite increasing engineering and operations challenges, Spitzer continued to produce transformational science for another 10 1/2 years – far longer than mission planners anticipated.

During its extended mission, Spitzer continued to make significant scientific discoveries. In 2014, it detected evidence of asteroid collisions in a newly formed planetary system, providing evidence that such smash-ups might be common in early solar systems and crucial to the formation of some planets. In 2016, Spitzer worked with Hubble to image the most distant galaxy ever detected. From 2016 onward, Spitzer studied the TRAPPIST-1 system for more than 1,000 hours. All of Spitzer’s data are free and available to the public in the Spitzer data archive. Mission scientists say they expect researchers to continue making discoveries with Spitzer long after the spacecraft’s decommissioning.

“I think that Spitzer is an example of the very best that people can achieve,” said Spitzer Project Scientist Michael Werner. “I feel very fortunate to have worked on this mission, and to have seen the ingenuity, doggedness and brilliance that people on the team showed. When you tap into those things and empower people to use them, then truly incredible things will happen.”

NASA’s Jet Propulsion Laboratory (JPL) in Pasadena, California, conducts mission operations and manages the Spitzer Space Telescope mission for the agency’s Science Mission Directorate in Washington. Science operations are conducted at the Spitzer Science Center at Caltech in Pasadena. Spacecraft operations are based at Lockheed Martin Space in Littleton, Colorado. Data are archived at the Infrared Science Archive housed at IPAC at Caltech. Caltech manages JPL for NASA.

Lockheed Martin in Sunnyvale, California, built the Spitzer spacecraft, and during development served as lead for systems and engineering, and integration and testing. Ball Aerospace and Technologies Corporation in Boulder, Colorado provided the optics, cryogenics and thermal shells and shields for Spitzer.

View some of the amazing images showcasing some of Spitzer’s greatest discoveries at:

The Moon and Mercury May Have Thick Ice Deposits

Setting the Stage for Artemis Testing