On 17th April 2021, Game of Thrones is celebrating its 10th birthday and there will be many children across the UK doing the same, as the show’s premiere in April 2011 caused one of the decade’s biggest baby booms.

The study, undertaken by Tic Watches, analysed Office for National Statistics data on births and polled Brits on the events most likely to inspire amorous celebrations.

One of the largest birth spikes came in January 2012, nine months after Game of Thrones was initially released. The show is famous for its steamy scenes and they may have put viewers in the mood, as there were 2.84% more UK births in January 2012 than in the same month a year earlier, which is one of the decade’s largest increases.

The biggest spike in births, however, came nine months after Princess Charlotte was born in May 2015, with statistics1 revealing that February 2016 saw the largest year-on-year increase of the 2010s.  With an almost 5% year-on-year increase in babies born that month, the Princess’ arrival may have caused Brits to feel broody or even patriotic around that time, inspiring many couples to conceive a baby of their own.

Similarly, the huge football victories of May 2015, with Chelsea winning the Premier League and Arsenal taking the FA Cup, may also have stimulated euphoric sports fans to take their celebrations to the bedroom.

While big events can lead to an influx of births after nine months’ time, Tic Watches’ research also polled the nation to reveal the personal events that are most likely to get Brits in the bedroom 3, with anniversaries (36%), going on holiday (35%) and birthdays (32%) taking the top spots. 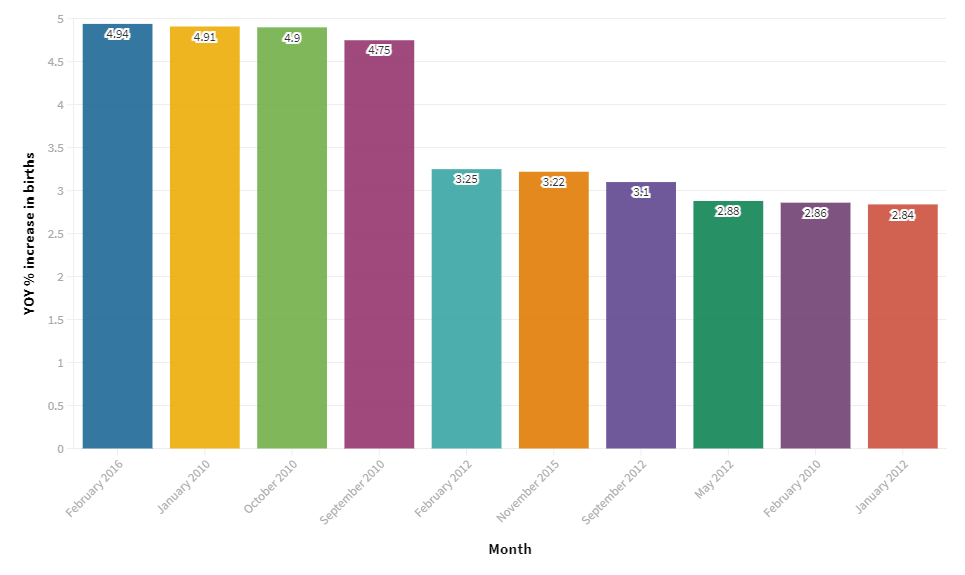 Here’s a list of some of the top pop culture events that triggered a spike in births in the last decade:

Whether football fans or royalists, May 2015 gave Brits much to celebrate. The birth of the Cambridges’ second child and first daughter, Princess Charlotte, on the 2nd put a spring in the step of many and may have led to the huge 4.94% increase in births the next February.

Additionally, with one in ten British men (10%) admitting that a trophy win for their favourite team tends to get them in the mood for time in the bedroom, football supporters may have taken to the bedroom to celebrate Chelsea’s Premier League win on the 3rd and Arsenal’s FA Cup victory on the 30th.

2009 was a very amorous year for the nation as four of the top 15 birth spikes of the decade were conceived that year.

An unusual aphrodisiac, Easter 2009 (12th April) may have contributed to the following year’s birth spike as 9% of Brits say they like to celebrate the Easter bank holiday weekend by doing the deed!

However, the Grand National (April 4th) may have also had an impact, giving some racing fans a reason to let the good times roll. With outsider horse, Mon Mome, winning the tournament at 100/1 odds – the first to do so in 40 years – some lucky fans will have received a huge cash win to celebrate.

Another romantic month for 2009, the festivities of December 2009 may have inspired many couples to spend time in the bedroom. One in seven couples (14%) tend to celebrate Christmas by making love, and the same amount like to bring in the new year on the 31st the same way.

For the festive times of 2009 however, there were even more reasons to celebrate. With a brand-new decade about to begin and the financial recession having officially ended earlier that year, it’s no wonder people were in high spirits.

Football may have sparked a lot of conceptions in May 2011 with Manchester City’s win over Stoke in the 130th FA Cup final on May 14th.

Additionally, an unseasonable dry spell coinciding with May half term and the May bank holidays meant that people were wearing less, drinking more and having a good time as the temperatures rose – perfect conditions to get pulses racing.

Around one in four couples (24%) say they always have intimate times on Valentine’s Day (14th), likely leading to the influx of births nine months later in November.

Another notable event that month was Super Bowl XLIX on the 1st , featuring the New England Patriots versus the Seattle Seahawks, with Katy Perry headlining the halftime show. Broadcast in the middle of the night in the UK due to time-zone differences, perhaps many couples found a fun way to make sure they stayed awake.

In April 2021, the TV blockbuster Game of Thrones is celebrating its 10th birthday and there will be many children across the UK doing the same, as the show’s premiere in 2011 caused one of the decade’s biggest baby booms. The epic fantasy drama is famous for its steamy scenes and its explicit content may well have got viewers in the mood.

Alternatively, the birth spike may have been caused by the marriage of Prince William and Kate Middleton, which also took place in April 2011.

Danny Richmond, Managing Director of Tic Watches, said: “It’s so interesting to look back and see which events might have caused baby booms. Whether it’s a sports victory or a festive celebration, all sorts of things can be a catalyst to get people into the bedroom. Perhaps as life goes back to normal after the pandemic, we’ll see another rise in babies in nine months’ time!”

“We were also really intrigued by the data on the personal events that get people in the mood. Who knew that going on holiday was more likely to have people feeling romantic than birthdays? We’ve put together a guide on all the most likely situations that tend to lead to amorous times in the bedroom. If you’re in a relationship, why not have a look and see if it matches up for you?”

To find out which situations get Brits in the bedroom, visit: https://www.ticwatches.co.uk/blog/2021/04/the-everyday-events-that-put-britain-in-the-mood-for-love/

The light comes on when no one’s home