When it comes to making new stars, the party is almost over in the present-day universe. In fact, it’s been nearly over for billions of years. Our Milky Way continues to form the equivalent of one Sun every year. But in the past, that rate was up to 100 times greater. So if we really want to understand how stars like our Sun formed in the universe, we need to look billions of years into the past. 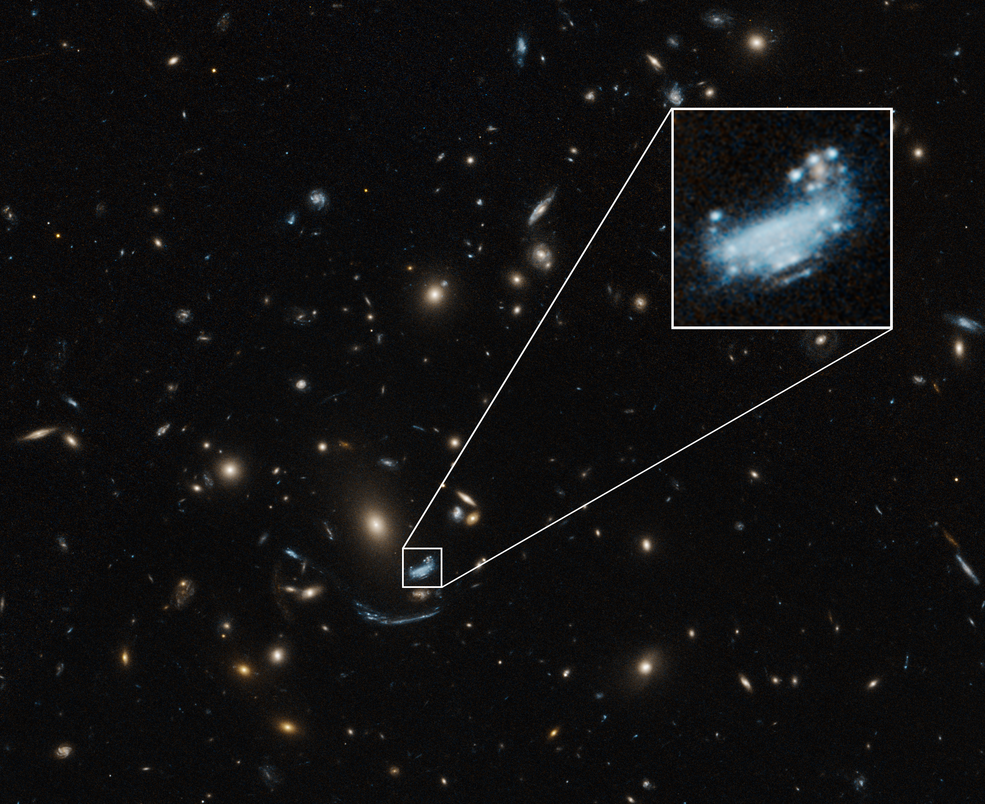 This is a Hubble Space Telescope image of galaxy SDSS J1226+2152, which is being magnified and distorted by the immense gravity of a galaxy cluster in front of it. It is one of four distant, star-forming galaxies the TEMPLATES team will study with Webb. The team chose it as an example of a galaxy that is not very dusty.
Credits: NASA, ESA, STScI, and H. Ebeling (University of Hawaii)

Using NASA’s James Webb Space Telescope as a sort of time machine, a team of researchers intends to do just that. Led by principal investigator Jane Rigby of NASA’s Goddard Space Flight Center in Greenbelt, Maryland, and co-principal investigator Joaquin Vieira of the University of Illinois, Champaign, the team will take advantage of natural, cosmic telescopes called gravitational lenses. These large celestial objects will magnify the light from distant galaxies that are at or near the peak of star formation.

The phenomenon of gravitational lensing occurs when a huge amount of matter, such as a massive galaxy or cluster of galaxies, creates a gravitational field that distorts and magnifies the light from objects behind it, but in the same line of sight. The effect allows researchers to study the details of early galaxies too far away to be seen otherwise with even the most powerful space telescopes.

“We’re studying four galaxies that appear much, much brighter than they actually are, because they’ve been highly magnified up to 50 times. We’ll use gravitational lenses to study how those galaxies are forming their stars, and how that star formation is distributed across the galaxies,” explained Rigby.

“The nice thing about using lensed sources is that it’s like a cosmic magnifying glass, where the galaxy is stretched out, so it enhances the resolution of your telescope,” said Vieira.

The program is called Targeting Extremely Magnified Panchromatic Lensed Arcs and Their Extended Star Formation, or TEMPLATES. Although TEMPLATES is an acronym, its meaning goes deeper. The word “template” refers to something used as a pattern, mold, or guide for designing or constructing similar items. “We want to make these four targets incredibly well-studied, and to have really good data, so other Webb researchers can use them as templates, or good examples, when they are working to understand data for a large number of galaxies that are much fainter,” said Rigby.

This video explains how very distant galaxies are magnified through the phenomenon of gravitational lensing.
Credits: L. Hustak (STScI)

How the Targets Were Chosen

One of the main reasons these four galaxies were chosen is because they’re very bright, making them easy to study. “All of these galaxies are forming stars like crazy,” said Vieira.

These targets also represent much of the variety of galaxies in the universe in terms of how dusty they are, how bright they are, and how many stars they’ve already made. Astronomers call galaxies ‘dusty’ when their images show dark, often fuzzy patches that come from dust in the galaxy blocking starlight.

The TEMPLATES team will use three of the four instruments aboard Webb, as well as many of the telescope’s filters and settings, to get as much data as possible on these galaxies. In addition to taking pictures, the team will use spectroscopy, a technique that will reveal the chemical composition of the galaxies, how gas is moving, and how dense and hot that gas is.

Webb will allow the team to make those measurements across each galaxy. “It’s like dissection,” explained Rigby. “We’ll pick apart every piece of the galaxy, rather than just getting one average measurement.”

Unlocking the Mysteries of Star Formation

1. Measure how many new stars are forming, to determine how rapidly galaxies form stars. By making different kinds of measurements of star-formation rates for the four galaxies, the team plans to see how well they agree or disagree. Through cross-checks, the team will determine whether or not these galaxies are in the midst of vigorous star formation, or if they are just forming a star occasionally.

2. Map the star-formation rate in these galaxies. Scientists don’t know much about where stars form in galaxies over most of cosmic time. Mapping star formation in galaxies in the nearby universe is relatively easy, but it’s much more difficult for distant galaxies. Looking across most of cosmic time, distant galaxies all appear very small in the sky and individual features cannot be resolved. So, scientists don’t have a good understanding of where stars formed in galaxies in the early universe.

3. Compare the young and old stellar populations. Scientists will measure the older stars—stars that live for billions of years, like the Sun. They’ll determine where those stars reside within a galaxy, which will inform them about the past history of star formation. Then they can compare that data to where the new stars are forming. That will reveal how star formation has changed in galaxies over time, and answer some basic questions about how galaxies grow. For example, do they build up from the inside out, or from the outside in?

4. Measure the conditions of the gas within these galaxies. Scientists will determine how much of the periodic table these galaxies have built up—for example, how much carbon, oxygen, and nitrogen they contain. They will also measure other physical conditions such as how dense the gas is.

The team’s observations will be part of the Director’s Discretionary-Early Release Science program, which provides time to selected projects early in the telescope’s mission. This program allows the astronomical community to quickly learn how best to use Webb’s capabilities, while also yielding robust science. The team is also helping other researchers understand the best way to take data with this telescope.

“TEMPLATES really just scratches the surface of what you can do with Webb,” Rigby continued. “It definitely will not be the last word—it’s one of the first words of what this telescope will be able to do, how we can understand galaxies. What we’re doing with TEMPLATES is we want to make sure we’re hitting the ground running with gorgeous data early in the mission to really understand how to make the most of Webb’s amazing capabilities.”

The James Webb Space Telescope will be the world’s premier space science observatory when it launches in 2021. Webb will solve mysteries in our solar system, look beyond to distant worlds around other stars, and probe the mysterious structures and origins of our universe and our place in it. Webb is an international program led by NASA with its partners, ESA (European Space Agency) and the Canadian Space Agency.