When Neil Armstrong became the first human to stand on the Moon, he had a three-dimensional view that allowed him to select samples to bring home to Earth. Now, scientists – and you – can see part of the first rock he picked up in unprecedented resolution and detail online through a NASA project with an interdisciplinary artist.

The digitization is part of NASA’s Astromaterials 3D project that began in 2013 to make the lunar sample collection more accessible to researchers and the public. The agency plans to make 50 to 60 samples available on its website beginning in the Spring of 2020. The samples provide the public with research-grade photogrammetric exterior and X-ray computed tomography interior 3D models. 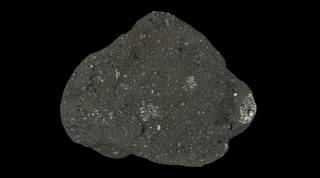 Astromaterials 3D’s first public release of an interactive 3D model of Apollo 11 Lunar Sample 10021,79, a small rock from the Contingency Sample, the very first sample picked up from the Moon. (NASA/Astromaterials 3D)

Since 2013, the artist, Erika Blumenfeld, has been leading the development of the digital database with a multidisciplinary team. This sample and the future collection of 3D samples, will make these research-grade 3D models accessible worldwide in a new way. They’re an information-rich visualization of NASA’s remarkable Apollo lunar and Antarctic meteorite samples.

“These rocks have incredible significant scientific value but they also have real cultural significance as well,“ said Blumenfeld. “This project helps make them more accessible to researchers but also to people beyond the research community. Their unique characteristics and composition, and the stories they tell of our Earth, Moon, and Solar System, become available to everyone.”

Apollo Sample 10021,79, a subsample of parent rock 10021 which, in turn, is a subsample of the first Apollo sample collected (contingency soil sample 10010) has an extraordinary story to tell. It was formed when an energetic impact on the lunar surface sintered the fine lunar soil into rock through heat and pressure. 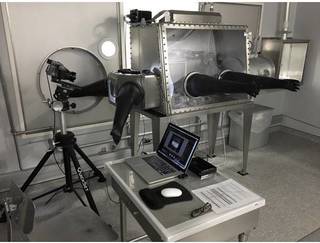 The soil that comprises this rock came from older impact events and volcanic processes that occurred over billions of years. Within its matrix are multi-colored glass spherules, indicative of impact melt formed in the atmosphere-free conditions on the Moon. The sample is 14.7 grams of the 842 pounds (382 kilograms) of rock and soil that the six Apollo lunar surface missions returned to Earth. The sample was on the ground directly outside the lunar module where Armstrong first placed his foot on lunar soil.

Charged with going full speed ahead to the Moon, NASA’s Artemis Program is working to send the first woman and next man to the surface by 2024. This time, NASA plans to land on the South Pole, where humans have never been before. Scientists hope to find out more about our own planet by studying the geology of the Earth, the Moon, and Mars. By comparing the three planetary bodies we know the most about to understand the ways in which they are similar and different, we will learn fundamental facts about how planets and planetary systems form.

Projects like Astromaterials in 3D are helping bring that knowledge to a wider audience.

The project is managed by the Astromaterials Research and Exploration Science Directorate at NASA’s Johnson Space Center in Houston.

Observing Titan for Signs of Life

Thumbs Up From Out of This World