After passing a key review hurdle, NASA’s newest mission to study the health of Earth’s ocean ecosystems and atmosphere is ready to move from design to reality.

PACE project scientist Jeremy Werdell explains the importance of phytoplankton to both ocean ecosystems and the atmosphere. These tiny plants are at the bottom of the marine food chain and affect the health of the ocean ecosystem in a variety of ways.
Credits: NASA / Matt Radcliff

The Plankton, Aerosol, Cloud, ocean Ecosystem (PACE) mission will study phytoplankton — microscopic plants and algae that live in the ocean — as well as the clouds and atmospheric aerosol particles above the water. Every mission goes through a rigorous review process on its journey from idea to launch, and PACE is now cleared to move forward to the critical design phase of the mission.

“Other than launch, I’d say this is the most significant milestone that we will have,” said André Dress, PACE’s project manager.

NASA’s Goddard Space Flight Center in Greenbelt, Maryland, leads the development of PACE, and is building its spacecraft and primary instrument, the Ocean Color Instrument (OCI).

The OCI is a hyperspectral scanning radiometer that measures the intensities of the colors of light reflected back from the ocean and atmosphere. Whereas previous Earth-observing satellite instruments measured only a handful of wavelengths, the OCI will continuously monitor color from ultraviolet through visible and short-wave infrared wavelengths, said Jeremy Werdell, the mission’s project scientist.

The OCI’s high resolution and broad spectrum make it perfect for spotting phytoplankton. These tiny plants are at the bottom of the marine food chain and affect the health of the ocean ecosystem in a variety of ways. Some species provide food for sea life from fish to whales. Toxic species of phytoplankton can multiply into harmful algal blooms (HABs) that contaminate water, sicken animals and people, and harm coastal tourism and economies. And after a bloom, the bacteria that consume the dead phytoplankton can deplete the oxygen in the water, leading to “dead zones.”

“This is how the science of ‘ocean color’ works: you measure the specific colors of the rainbow from orbit — usually colors of visible light — and relate the spectral differences in the intensities of these colors to geophysical, biological and optical properties of the ocean,” said Werdell. “We’re particularly interested in phytoplankton communities, but you can also see highly meaningful patterns of dissolved organics and suspended sediments … really, anything in the sunlit upper ocean that changes its color.”

With the OCI, scientists will be able to distinguish individual communities of phytoplankton from space with more fidelity and detail than ever before. And with PACE’s two-day coverage of the globe, they will be able to track changes in phytoplankton populations across the Earth’s ocean over short time frames. 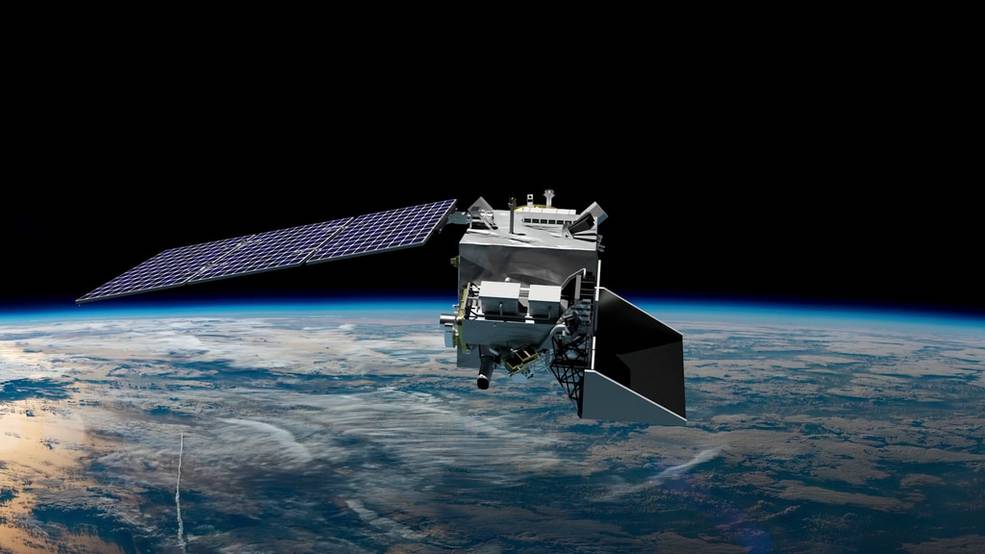 PACE’s completion of Key Decision Point C means its budgets and plans are approved by NASA. The team is now cleared to move forward to the critical design phase of the mission and the initiation of the flight build for the spacecraft and its three instruments.
Credits: NASA / Walt Feimer

“We’re very good at determining whether there are many phytoplankton or a few, but we don’t have the tools in place to adequately identify their community structure or how it changes in time and space,” Werdell said. “By looking at the full spectrum of visible light, we’ll have a critical, currently unavailable tool to differentiate between communities. This is essential for understanding our home planet. Just like land plants, phytoplankton form the base of a food chain. When phytoplankton communities change, the food chain changes.”

PACE will also carry two multiangle polarimeters dedicated to studying the clouds and aerosols above the oceans. Polarimeters measure the ways that molecules and particles change the oscillation of light waves that pass through them, providing information about particle size and composition. Because the reflection, absorption and scattering of light in the atmosphere is a key part of the balance between incoming and outgoing energy — impacting Earth’s temperature and climate change — these instruments will help scientists measure and understand the role of atmospheres and ocean ecosystems in Earth’s global processes.

The Spectro-polarimeter for Planetary Exploration (SPEXone) will be built and overseen by the SRON Netherlands Institute for Space Research and Airbus Defence and Space Netherlands. The Hyper-Angular Rainbow Polarimeter #2 (HARP2) is built by the Earth and Space Institute at the University of Maryland, Baltimore County.

“The synergy across these three instruments will enable more advanced ocean-atmosphere science than is currently possible with anything existing or planned,” Werdell said. “The fact that PACE offers a combination of ocean and atmospheric science together represents a quantum leap forward in possibilities for better understanding our home planet and how it is changing.”

Banner Photo: The Plankton, Aerosol, Cloud, ocean Ecosystem (PACE) mission will study phytoplankton — microscopic plants and algae that live in the ocean — as well as the clouds and atmospheric aerosol particles above the water.  Credit: NASA / Walt Feimer

Retroreflectors: From Apollo to Mars

A Cosmic Jekyll and Hyde