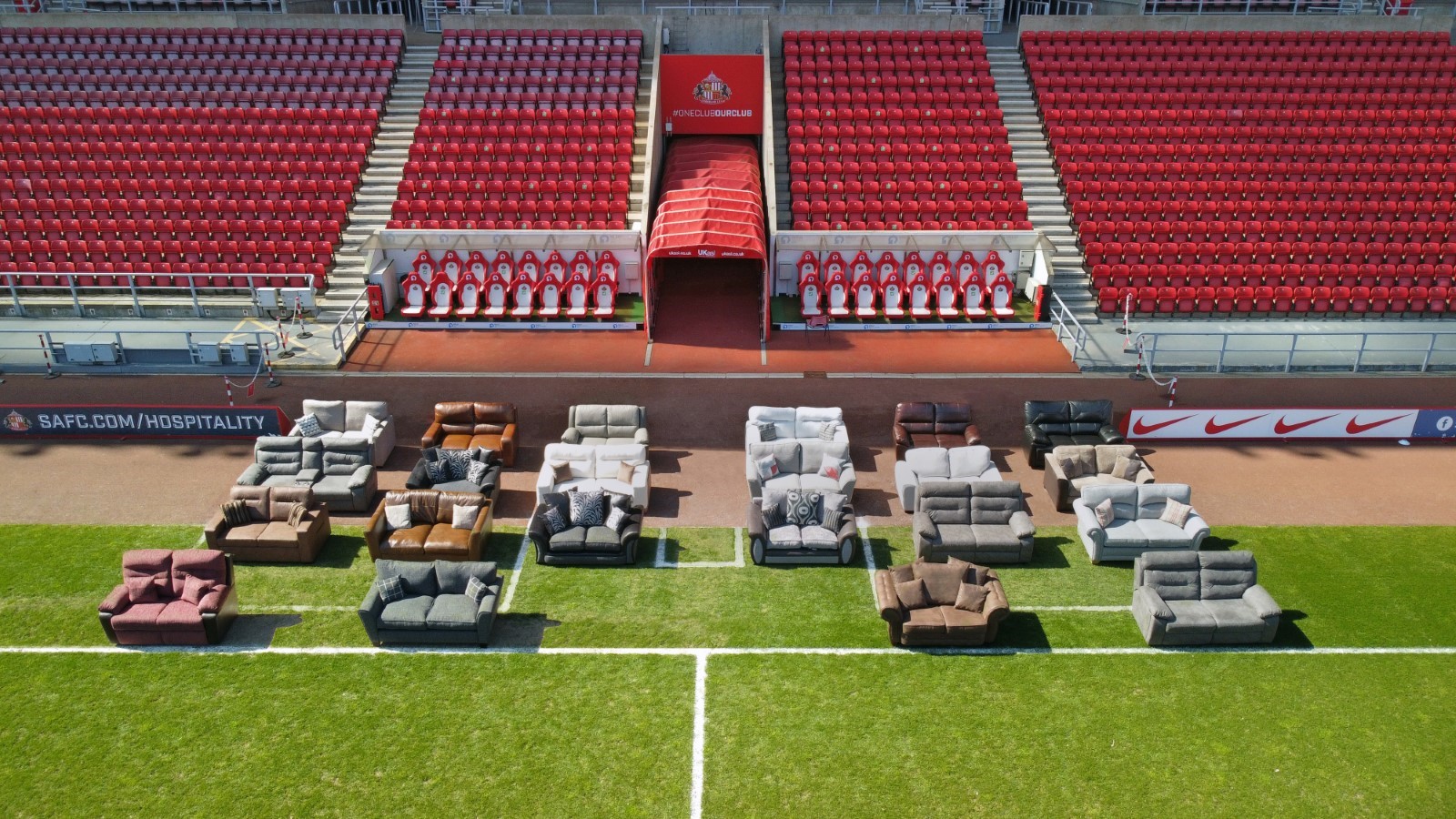 Twenty-two empty two-seater sofas took over Sunderland’s Stadium of Light this week to represent the 44 people who lose their lives every day due to bowel cancer, the UK’s second biggest cancer killer, which is more than 16,000 lives lost every year.

Sofa and carpet specialist, ScS, who are based in Sunderland, has been working with ITV’s Lorraine to raise awareness of bowel cancer and its symptoms, which if caught early enough, can often be cured by treatment and  prevent it from coming back.

Bowel cancer survivor, Deborah James, presented part of the ITV show live from an ScS sofa at the stadium on Tuesday April 20th, to talk about issues surrounding this type of cancer, urging people to check for symptoms and visit a doctor if they are worried. The Stadium of Light was chosen as it holds 49,000 seats, a number close to those diagnosed with the disease each year in the UK (42,000).

This takes place as new research comes to light, which reveals that over half (54%) of Brits are unable to identify1 even the most prominent symptoms of bowel cancer. When asked to select from a list of symptoms, a third (33%) didn’t recognise having blood in their stool as a warning sign, almost half (48%) failed to realise abdominal pain as an indicator of the disease, and over half (55%) didn’t flag changes in bowel habits (e.g. looser stool) as a possible symptom.

The project, run throughout Bowel Cancer Awareness Month (April), is designed to highlight the fact that bowel cancer is often treatable if symptoms are caught early enough. Nearly everyone survives the disease if diagnosed early1, therefore it’s crucial that people are aware of the symptoms to look out for.

In order to raise more awareness of the campaign, the Sunderland based sofa and carpet company has added helpful stickers to their fleet of delivery vans, will have informational signs in all of its stores as well as featuring the campaign in its TV ads, running from 22nd April to 4th May. ScS is also donating £24,901 to Bowel Cancer UK, which is equivalent to the number of miles around the earth, as staff are attempting to complete this distance in a sponsored walk, helping to raise even more funds. 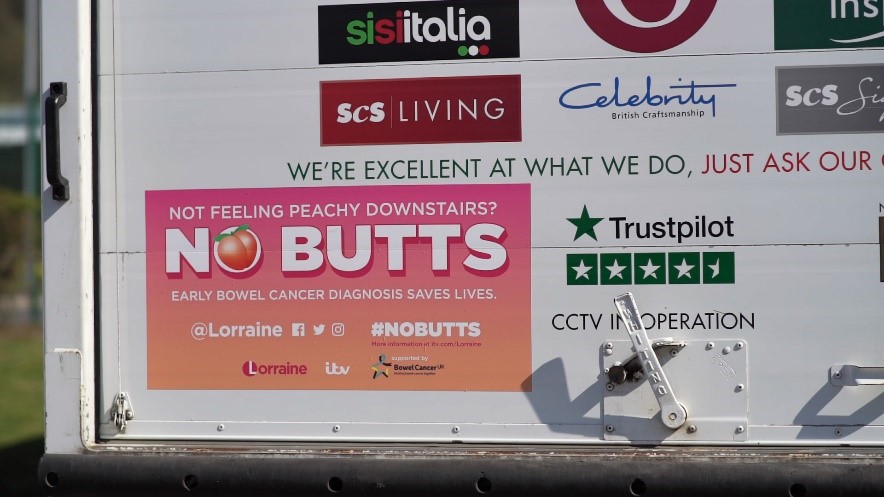 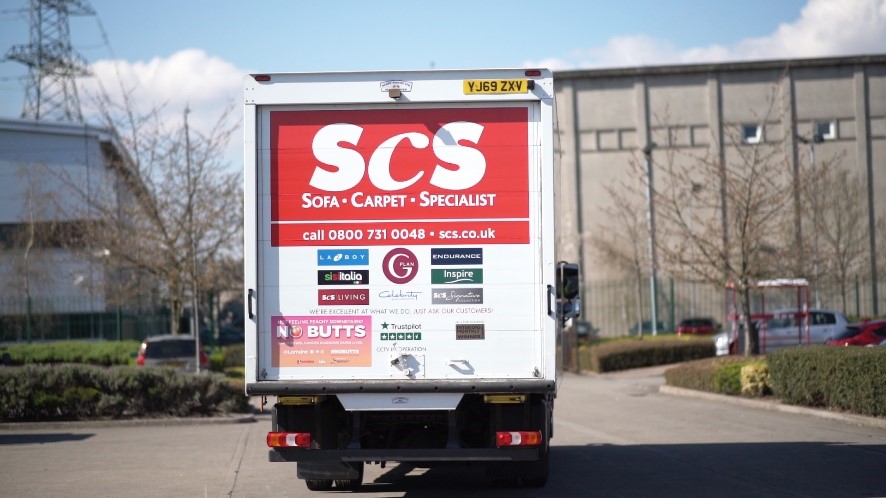 Monica Jordan, a Customer Service Administrator at ScS, shares her family’s experience with bowel cancer: “Both my nana and my mum sadly passed away from bowel cancer after being diagnosed too late. If we had known earlier things may have been different, and that’s incredibly frustrating to know. It’s so important for people to know the symptoms and everything they can do to help prevent it, so they can find it early and treat it before it’s too late.”

Genevieve Edwards, Chief Executive at Bowel Cancer UK, said: “Bowel cancer is the UK’s second biggest cancer killer, but it’s treatable and curable, especially when diagnosed and treated early, so it’s essential people know the symptoms to look out for. Having a focus on the disease on ITV’s Lorraine will hopefully go a long way to helping raise awareness of the signs and saving lives. We are also thrilled to have the support of ScS, who is generously fundraising for our charity, and their support will help with our lifesaving research and vital bowel cancer services. We wish them all the best for their ambitious round the Earth challenge.”

Steve Carson, CEO of ScS, said: “We’re delighted to be able to support Bowel Cancer UK and ITV’s Lorraine campaign to help raise awareness for such an important cause. The fact that bowel cancer is so often treatable means that awareness can quite literally be the difference between life and death.

“We wanted to pay respect to those who lose their lives to bowel cancer each year, by showing empty seats in the stadium that is so close to our home in Sunderland.

“At ScS, we are helping to fundraise for the charity by attempting to walk the equivalent of the entire circumference of the Earth! It’s going to be a massive team effort as we need to cover over 24,000 miles, but the money will make a real difference, so that will spur us on.”

For more information about ScS’ research and how to identify the symptoms of bowel cancer, visit: https://www.scs.co.uk/lifestyle/how-to-identify-bowel-cancer.html

Leave your car at home twice a month for the good of the planet, urges Go North East