Fifty years ago, on April 22, 1970, people around the world marked the first Earth Day. Thousands gathered to raise awareness about the importance of protecting our beautiful planet for future generations.

On this Earth Day, as we physically separate ourselves by necessity, we can still collectively appreciate the wondrous beauty of our planet and the extraordinary science that helps us understand how it all works – and we can do it from our homes.

Much as our Earth’s systems are interconnected so, too, are all of us. To help connect us virtually this Earth Day, we encourage you to share on social media photos and images of how you marked the 50th anniversary, using the hashtag #EarthDayAtHome. This could be a picture of a special science activity, an original work of art you created, the tree outside your window, or whatever inspires you.

To help get you started, NASA has collected activities, videos, special programs and other materials to help you observe “Earth Day at Home” with our Earth Day 50th Anniversary Toolkit. You also can find a variety of agency-wide resources at NASA at Home and at NASA STEM at Home, as well as in Spanish on Ciencia de la NASA. 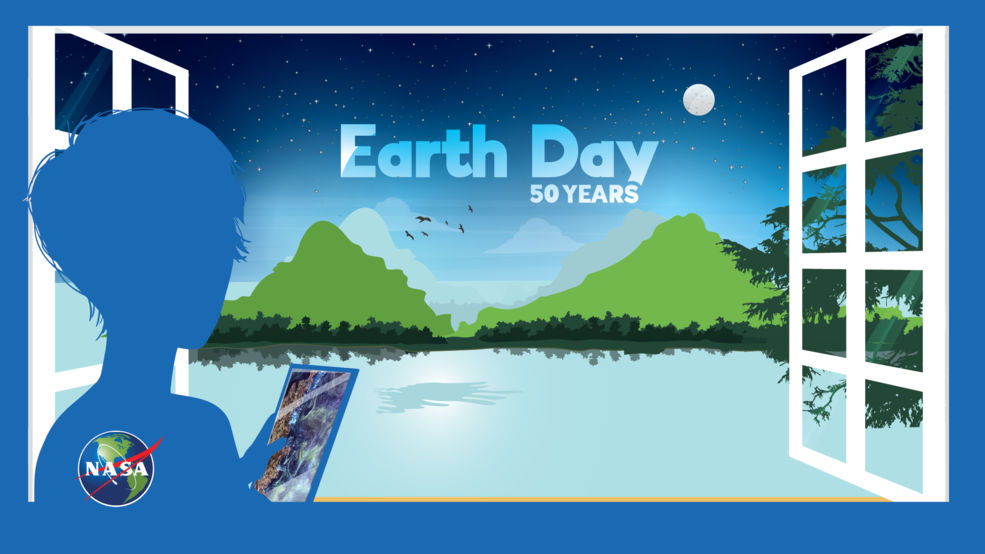 Explore Earth science and the many ways NASA studies our planet in an online webquest, then take the fun interactive quiz to see what you’ve learned.
Credits: NASA/Perisha Gates

Earth Day at Home Webquest:  You may know that NASA explores space and aeronautics, but did you know that it also studies Earth, and that all of this knowledge helps our environment? Go on a NASA Earth science webquestto see how NASA helps study and protect the land, air, water, and ice. Then see how much you’ve learned in a fun, interactive quiz.

Map Real Coral Reefs: You can help NASA classify and map 3D images of real coral reefs from your mobile device with the new NeMO-Net app. The images from satellites are made using special “fluid lens” cameras for a clear picture without the distortion of moving water. As players at all levels map the coral, they help the supercomputer at NASA’s Ames Research Center “learn” how to classify coral on its own.

Hit the Bricks: On Earth Day, LEGO builders around the world will have a special #LetsBuildTogether challenge developed with NASA. Meanwhile, see how you can use LEGO bricks or other stackable blocks to make a 3D model of the precipitation data from Hurricane Irma and of the Global Precipitation Measurement (GPM) Core Observatory satellite that collects the data. And while you’re there, learn more about how NASA measures rain, snow and other forms of precipitation on theGPM Education Page.

Make Your Own Worldview GIF: Explore 20 years of satellite views of our home planet in NASA’s online data archive and create your own Earth Day snapshot or animated GIF with the NASA Worldview data visualization app. A special Earth Day gallery of images from this global archive of hurricanes forming, wildfires spreading, icebergs drifting, and more is available for inspiration along with a tutorial to help you create your own Earth Day images.

Terrestrial Tournament: There may not be much new on ESPN, but images of Earth are duking it out in NASA’s Earth Observatory Tournament-Earth, which asks people to vote on their favorite Earth images in elimination brackets that will reveal a winner April 29, capping the 20th anniversary year of Earth Observatory.

Astronaut Jessica Meir, who recently returned to Earth, experienced rare and spectacular views of our planet while on the International Space Station, which she discusses in a special Earth Day video.
Credits: NASA

Special Edition: On April 22, at 3 p.m. (EDT), “NASA Science Live” will air a special edition featuring a discussion about Earth science with NASA Administrator Jim Bridenstine, in addition to features on how NASA technology is helping our planet, from mapping coral reefs, the newest electric airplane, and how we use technology developed for space on Earth.

NASA Looks Back at 50 Years of Earth Day: As the world prepares to commemorate the 50th anniversary of Earth Day, a stunning new NASA video reflects on how the continued growth of its fleet of Earth-observing satellites has sharpened our view of the planet’s climate, atmosphere, land, polar regions and oceans.

Putting Space to Work for Earth: This special video for Earth Day 2020 shows us how NASA’s unique vantage point of space allows us to better understand Earth’s interconnected systems and to use that knowledge to live sustainably on our home planet, protect life around the world, and adapt to natural and human-caused changes.

Explore Earth: NASA Earth science experts have recorded a new series of short videos from their homes on a wide range of topics, from scientific advances since the first Earth Day to research expeditions in the air and on the ground. The series is a featured playlist on NASA’s Science Mission Directorate YouTube channel.

Listen Up: NASA podcasts for Earth Day examine how we learn more about our planet through instruments (NASA Goddard Space Flight Center’s “Curious Universe”) and from humans in space (NASA’s Johnson Space Center’s “Houston, We Have a Podcast”). The monthly von Kármán lecture from NASA’s Jet Propulsion Laboratory will take an Earth Day focus as it looks at how NASA monitors global changes with a live webcast on YouTube April 16 at 10 p.m. (EDT).

The Best View: NASA astronauts inarguably get the best human view of our planet. For Earth Day, and in conjunction with the 20th anniversary of the International Space Station (ISS) in 2020, the popular “Down to Earth” video series featuring astronauts talking about what it’s like to see Earth from space will include a special Earth Day video. Two NASA astronauts are featured in additional new Earth Day videos. In “#EarthDayAtHome with Jessica Meir” (above), Meir talks about understanding our planet from the unique vantage of space. “Look Back at Earth with NASA Astronaut Andrew Morgan” takes viewers into the ISS cupola with Morgan as he talks about photographing the planet from space. Also on Earth Day, Astronaut Chris Cassidy, who arrived at the ISS on April 9, will answer questions from social media users in a live Q&A on NASA TV at 12:10 p.m. (EDT).

Inspiration: Since the first humans ventured above our atmosphere, they have been humbled by the beauty and fragility of our planet seen from space. In fact, it’s widely believed that the now-iconic “Earthrise” photo taken by Bill Anders on Apollo 8 in 1968 spurred the modern environmental protection movement that led to the first Earth Day. As Anders said, “We came all this way to explore the Moon, and the most important thing is that we discovered the Earth.” Watch a stunning 4K visualization of Apollo 8 as it saw Earth on the horizon, created by NASA’s Scientific Visualization Studio for Apollo 8’s 50th anniversary.

Get Social – From a Distance

Though we’re all observing Earth Day in our own way, with the hashtag #EarthDayAtHome we can connect a bit for the day on social media, and maybe even inspire and uplift each other for a while. And, follow @NASAEarth on Twitter and Instagram and Facebook.com/NASAEarth all day to catch the action.

Ice Life: On April 22 at 11a.m. (EDT) join NASA scientists for a watch party on NASA Earth Facebook as they talk about living and working in Earth’s ultimate remote location – Antarctica. After a short video, they’ll be online to answer viewers’ questions.

Bring the World to Your World 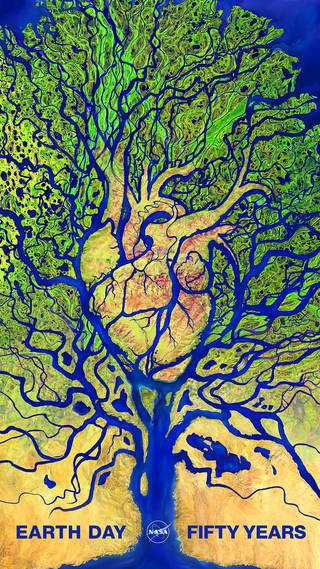 Earth’s Heartbeat: On this 50th anniversary of Earth Day, the NASA Science Mission Directorate poster uses real science data to present a stunning illustration of how our planet’s interconnected systems are its beating heart. The 2020 poster, as well as others from previous years, are available online.

Earth on Earth Day: New posters from NASA’s Jet Propulsion Laboratory show what Earth will look like from space on Earth Day. Another provides a more abstract image of our atmosphere. Downloadable posters and wallpaper for computers and phones are available here.

Earth at Night: The view from space is particularly breathtaking at night. This poster offers a sweeping image of the lights across the globe and is downloadable here. See more images in the eBook “Earth at Night.”

Earthrise: Two posters of the iconic image that “started it all” are available for download as part of the Apollo program 50th anniversary resources.

Operation Spruce Up moves to Bowburn