Galaxies were once thought of as lonely islands in the universe: clumps of matter floating through otherwise empty space. We now know they are surrounded by a much larger, yet nearly invisible cloud of dust and gas. Astronomers call it the circumgalactic medium, or CGM. The CGM acts as a giant recycling plant, absorbing matter ejected by the galaxy and later pushing it right back in.

NASA’s Far-ultraviolet Off Rowland-circle Telescope for Imaging and Spectroscopy, or FORTIS, mission will study this recycling process to help settle several unsolved mysteries. Launching on a sounding rocket from the White Sands Missile Range in New Mexico, FORTIS will observe a nearby galaxy to measure the gases its stars and supernova pump into the surrounding CGM. These observations will shed light on how material circulates in and out of galaxies, fueling star formation and galactic evolution. FORTIS’s launch window opens on Oct. 27.

A case of missing matter

Astronomers who study the life cycle of galaxies have struggled with two major mysteries.

First, to build new stars, galaxies need fuel — gases like hydrogen, helium, and sometimes heavier elements. But many galaxies continue making stars long after astronomers predict their fuel should have been exhausted. Where was the extra gas coming from?

Second, the byproducts of existing stars seemed to be missing. “As stars age, they pollute their surroundings,” said Stephan McCandliss, an astrophysicist at Johns Hopkins University and principal investigator for FORTIS. “They take in material around them and blow it right out.”

But scientists found that star-filled galaxies weren’t as polluted with metals — the heavy elements forged as stars burn — as they should have been. Metal-enriched gas was both entering and exiting galaxies, but no one knew how.

Astronomers knew about the existence of CGMs, but most were too dim and spread out to be studied in detail. Then, in 2009, the Cosmic Origins Spectrograph was added to the Hubble Space Telescope. The study of the CGM was now open for business.

Two years after the addition, a survey of the CGMs of 42 galaxies revealed they were full of gaseous metals. It was the stock of metals, missing from the galaxy, that astronomers had been looking for.

These metal-enriched gases weren’t just sitting there, either. Instead, the CGM passes them back and forth with the galaxy as part of a continuous recycling process.

“The CGM is critically important to understanding galaxy evolution, since it is the repository for much of the star formation fuel,” said Scott Porter, an astrophysicist at NASA’s Goddard Space Flight Center in Greenbelt, Maryland.

Gravity, pulling gases from the CGM towards the galactic center, injects galaxies with fresh fuel for making stars. At the same time, stellar winds and supernova shoot metals back into the CGM, replenishing the supply.

Animation of a gigantic star exploding in a “core collapse” supernova. Supernovae are one way that galaxies eject metal-enriched gases into the circumgalactic medium.
Credits: NASA/JPL-Caltech

How stars and supernovae pollute

The FORTIS mission will quantify how much gas gets pumped into the CGM as part of this recycling process. Specifically, the telescope measures the winds of stars and supernovae to find out how much gas is blown into the CGM — and how much flies right past it.

“If gas is ejected at a very high speed, it’ll escape the galaxy completely,” McCandliss said. Precious metals may be shot through the CGM all the way to intergalactic space, dropping out of the recycling process. “But if they’re ejected at a low speed they’ll circulate around and help enrich the galaxy.”

To this end, FORTIS will fly high on a sounding rocket, a suborbital space vehicle that launches into space for a 15-minute roundtrip before landing back on Earth. FORTIS will aim its instruments at the Triangulum galaxy, also known as M33, 2.7 million light-years away. Triangulum is bright, with many recently formed stars boasting strong stellar winds. 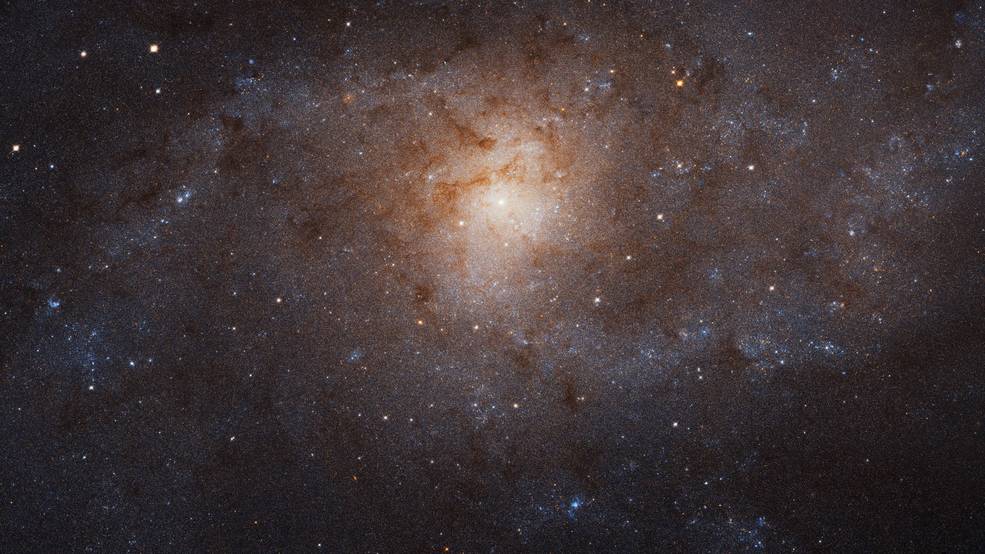 The Triangulum galaxy, also known as Messier 33 or M33, as imaged by the Hubble Space Telescope.
Credits: NASA, ESA, and M. Durbin, J. Dalcanton, and B. F. Williams (University of Washington)

After about a minute observing M33, FORTIS will focus on its brightest clusters of stars and supernovae to measure the speed and composition of their winds. “This will all give us an idea of how that material is circulating and just how much of it is being moved,” McCandliss said.

Like many sounding rocket missions, FORTIS will pursue these science questions while testing new tools. For this flight, FORTIS is using a next-generation microshutter array that builds on a design used for NASA’s James Webb Space Telescope. The updated instrument will allow FORTIS to measure up to 40 separate targets at a time, in wavelengths of far-ultraviolet light beyond what earlier versions could resolve.

“It’s new science enabled by new technologies,” said McCandliss. “We want to train our workforce into bigger and better missions.”

The FORTIS mission will launch from the White Sands Missile Range in New Mexico on a Black Brant IX sounding rocket. The trajectory peaks at an altitude of approximately 155 miles before falling back to Earth for recovery. The team expects six minutes of observing time, with a total flight time of approximately 15 minutes. The launch window opens on Oct. 27 at 10:30 p.m. MDT.

Artist’s View of a Planet Where Liquid Water Might Exist