25 Years of Science in the Solar Wind

In the early 1980s, heliophysicists needed answers. They wanted to learn how to protect astronauts and assets around Earth from the potentially damaging space weather that results from our tumultuous Sun. To do that, they needed to better understand the constantly changing, dynamic space system around our planet — including measurements of the properties of the solar wind, the constant billowing of charged particles coming off the Sun. Answering this call was the aptly named Wind mission, which launched 25 years ago, on Nov. 1, 1994. Wind currently orbits at the first Lagrange point, L1, a spot of gravitational balance between the Sun and Earth, which allows the spacecraft to face the Sun at all times. 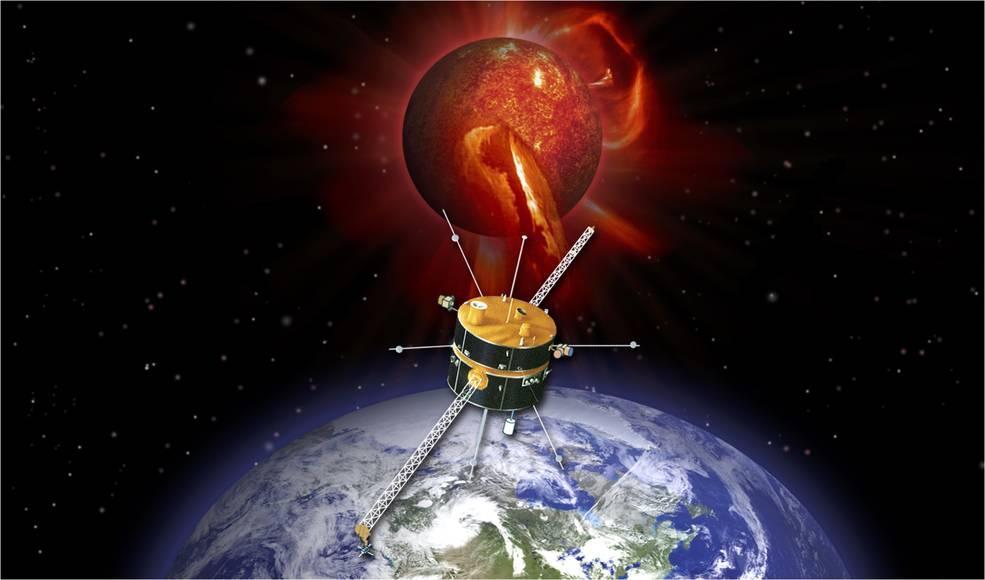 An artist’s illustration of the Wind spacecraft, which launched 25 years ago in 1994.
Credits: NASA’s Goddard Space Flight Center

For the past 25 years, Wind has been studying the heated gas of charged particles — known as plasma — that fills the space between planets. The observations have allowed scientists to gain an understanding of the solar wind and its interactions with the near-Earth environment. Wind data has been instrumental in elucidating solar wind properties, intense space weather, and interstellar space, as well as assisting other spacecraft that have gone on to study the Sun up close.

So far, Wind’s data has been used in over 5,000 publications, and supported almost 100 graduate degrees. It has been steadily taking data for 25 years, and has enough fuel at its current orbit to last until 2074. Wind’s scientific results are prodigious — here are some of the coolest results from the last 25 years:

Early in its mission, Wind tuned in to the radio frequencies of the Sun. By listening in, Wind was able to detect a hum coming from our star; the Sun was singing. By tracking the minute changes in this frequency, scientists can remotely observe the surface of the Sun and the space weather that comes towards Earth.

In the early years of observations, scientists noticed something interesting happening with Wind’s electric field detectors aboard the mission. Every now and then, a large spike would appear in the data. Eventually, scientists determined the spikes’ origin: hyper-fast dust particles impacting the spacecraft. When these dust particles hit Wind, they create tiny explosions of plasma on impact, which resulted in electric field spikes on the instruments. Such particles can come from inside or outside the solar system, but most interstellar particles are kept out due to the influence of the solar wind. We do not have many tools in space to detect them. So far Wind has measured well over 100,000 dust particle impacts. Scientists can use the information to determine where this dust comes from and better understand the properties of space outside our Sun’s influence.

Wind has been a big part of helping scientists understand coronal mass ejections, or CMEs. Wind was designed to measure the magnetic fields of CMEs as they passed by. Coronal mass ejections are gigantic clouds of solar material that burst off the Sun, pulling solar magnetic fields along for the ride. Since the 1980s, scientists have improved their ability to determine which CMEs would hit Earth, and which would miss Earth, based on what Wind observes as a CME passes. This allowed space weather scientists today to make more accurate models that let them determine where a CME will hit, just by seeing what it looks like as it comes closer to Earth.

After 25 years, Wind isn’t done yet. Wind has enough fuel to keep orbiting and taking data until 2074 — another 55 years of science. But how does it stay up there for so long? For one, it’s in a spin-stabilized orbit. This means that it’s spinning around itself like a top, which keeps it steady in its orbit. This also means Wind doesn’t need to use much fuel to stay in place. It’s also very well protected — highly conductive, so that the solar wind and other particles that interact with it are of no concern to the spacecraft.

On top of the spacecraft engineering, the instruments were designed for triple redundancy, which means there are three independent measurements of plasma density. Having these redundant systems allows for highly accurate data analysis, and means Wind can be used to calibrate instruments on other spacecraft. Wind records this data on two tape recorders — much like a VHS or cassette tape. The satellite sends the data back to Earth, and only once that data is received will Wind write over that data.

Wind’s longevity has allowed it to observe a full 22-year solar cycle, the recurring cycle during which the entire solar magnetic field reverses polarity. That is, each magnetic pole switches from positive to negative or vice versa, then switches back again. Wind’s long-term, high-accuracy observations have given scientists the only single-source, continuous observation of the solar wind over one full solar cycle.

During a detour through Earth’s magnetic field, Wind serendipitously flew through a region undergoing a process called magnetic reconnection. Magnetic reconnection happens when magnetic field lines twist and eventually snap. Near Earth, our planet’s magnetic fields fly back towards the poles, bringing high-energy particle beams of plasma along for the ride and exciting particles in Earth’s upper atmosphere. When Wind measured this process, scientists discovered something interesting: The process appeared to be collisionless. That is, instead of being pushed along — the way a drop of water pushes the next in a chain event that creates a current — the particles moved because they were guided by the magnetic field. This was not what was expected. Particles tend to react to each other, but in the collisionless shock, they essentially ignored each other’s existence. The discovery helped explain why the observed magnetic reconnection was so much faster than previously predicted by reconnection that depended on collisions.

NASA missions continue to use Faraday cups to study the solar wind, much like the Solar Wind Experiment from Wind that launched in 1994, on the left. On the right is the Parker Solar Cup aboard Parker Solar Probe, which launched in 2018.
Credits: Left: NASA/MIT; right: NASA/Harvard-Smithsonian Center for Astrophysics

9. Helium and the Solar Wind

One of the instruments on Wind spotted an interesting quality of the solar wind. The solar wind experiment uses a Faraday cup — a charge-collecting plate — to measure the speed, density, and temperature of hydrogen and helium in the solar wind. While studying the solar wind over 10 years with over 2.5 million measurements, scientists noticed the solar wind never traveled slower than 161 miles per second. Any slower, and the solar wind couldn’t escape the Sun’s surface. They also saw that the faster the solar wind, the more helium was present in it — with barely any helium observed at the lowest speeds. This tells scientists that helium is somehow helping set the speed of the solar wind, but they’re still searching for the exact process that causes this. Other missions flying closer to the Sun — such as NASA’s Parker Solar Probe and ESA’s Solar Orbiter, scheduled to launch in February 2020 — may provide additional clues.

Wind’s high-resolution data offered new insight into the frequency of a solar phenomenon called flux ropes, thin strands of magnetic field bundles that come off the Sun and interact with Earth’s magnetosphere. Unlike the larger CMEs that occur more often during solar maximum, these flux ropes appear more frequently during solar minimum. Scientists continue to study them to understand how they interact with our magnetosphere.

Over the last 25 years, Wind’s observations have offered new insights into multiple solar and plasma phenomena, including gamma ray and kinetic physics. As it continues its observations of the Sun and near-Earth space, Wind will answer the call for plasma and solar wind observations, and possibly introduce even more mysteries to study into the future.