Thursday 31st March 2022 – Team17 and Heliocentric Studios have today announced the release of the Druids & Dungeons update for multiplayer roguelite adventure Rogue Heroes: Ruins of Tasos, on PC and Nintendo Switch™. The update invites players to explore several new handmade dungeons, filled with new puzzles to solve, enemies to fight, and bosses to vanquish, as well as introducing a new playable class. Druids are able to transform into six different forms (aquatic, croaker, squirrel, lemur, snake, and dog) each with their own abilities to help with both environment traversal, and combat situations. The Druids & Dungeons update also includes difficulty level options, new shops, items, side quests, and more. The full patch notes for the update can be found on the Team17 website.

Transform yourself with the new update: 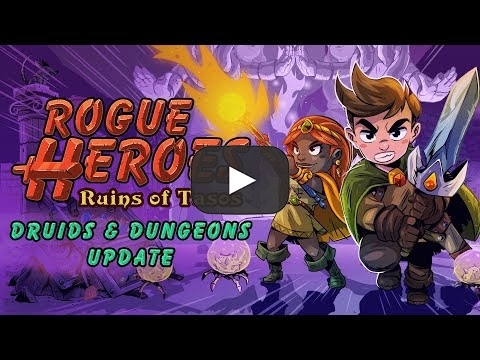 First launched in February 2021 for PC and Nintendo Switch™, Rogue Heroes: Ruins of Tasos challenges players to journey across the land of Tasos and delve into the depths of procedurally generated dungeons to save it from sinister Titans. Gems earned during dungeon runs can be used to rebuild the hometown of Intori, which in turn grants access to upgrades that can improve playable characters as well as unlocking other classes and equipment. Playable solo or co-op, both online and local, Rogue Heroes: Ruins of Tasos scales with the number of players to ensure a balanced gameplay experience.

Get a reputable Toto Site (토토사이트) to enjoy safely and fun