EXPERT COMMENT: Stop that car, and plan cities around bikes to make cycling a real option for more women

Planners design the infrastructure of cities for cars, not bikes. This needs to change to make cycling a more viable option for more people, says Phd Candidate, Katja Leyendecker, writing for The Conversation.

Growing up in North Germany, cycling was my main means of transport, as would be usual for residents. When I moved to Newcastle, northern England in 1996, I stopped. The clear cycle paths I was used to in Germany simply didn’t exist and I didn’t feel safe. But slowly I began cycling more a few years later. Short local trips at first, then to work, and for leisure in the countryside. I enjoyed the thrill of it.

But cycling became more and more difficult over the years and I soon reached a point where it didn’t seem worth it anymore. Competing with fast and heavy motor traffic whilst being on a flimsy two-wheel metal frame was increasingly something that worried me. By 2009, it had started to feel downright treacherous and extremely uncomfortable. It was at this point that I started campaigning.

But despite these known and well-documented benefits, rates of cycling have remained lowin anglophone Western countries. Nationally, getting around by bike is particularly rare in the UK, with only 2% of all trips cycled. In comparison, in the nearby Netherlands, 27% of journeys are made by bike; in Denmark it’s 18%; and in Germany 11%. 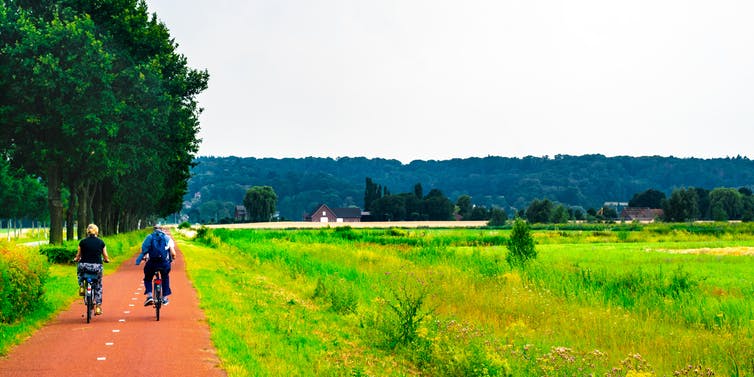 In the UK, cycling is also primarily a male rather than female travel mode. Less than a third of all UK cyclists are women, whereas women’s cycling participation is 56%, 55% and 50% in the Netherlands, Denmark and Germany respectively. These three countries seem to work for women and cycling. So what keeps people from choosing the bike?

First up there’s the notion that cyclists in low-cycling countries, like the UK, have an image problem. Or as urban planning expert Clara Greed put it: “Some young men on bicycles (dressed in lycra outfits, face covered with air-filter masks) are extremely arrogant and aggressive, just like some men in cars, and seldom are they burdened with shopping or children.” Put simply, our transport system is designed for speed. Aggression abounds. Dog eat dog. Might is right. Close passes are a normality. Inconsiderately parked vehicles block the roads. All this hinders walking and cycling.

Of course, the right infrastructure could change this. But despite the availability of the technical expertise in what is needed to get more people on bikes, cycling levels in the UK have remained low. Although cycling levels have increased almost every year since 2008, the rise is pretty slow over the country as a whole, with some exception for some cities, such as London. And more cycling does not mean a diverse range of people are cycling.

Experts agree that in particular, protected cycle space is needed. Most people want to cycle away from motor traffic; in their own space; at their own leisure. More cycle lanes that physically separate cycling from driving spaces would enable a broader spectrum of the population to cycle.

This would entail taking into account the full variety of journeys that are made around a city. Road design favours those commuting by car, and commuting, historically, is a breadwinner’s activity – usually a man’s. A substantial building programme is needed to rearrange our cities to benefit all types of journeys – such as school runs, grocery shopping or visiting friends – encouraging people to cycle or walk. This would involve constructing cycleways, getting cars out of living and shopping quarters and prioritising public transport on roads and rails.

A wall of officials

I want cycling to be stress-free. As a woman who would like to enjoy cycling more, I have long been frustrated with this very slow rate of change. This is why in 2010, I co-founded the Newcastle Cycling Campaign. And why in 2015, I began to research cycling activism, hoping to inspire policy implementation. Over the last decade, I have carried out countless conversations with a diversity of people, campaigners and decision makers alike.

Speaking with women activists was a particularly humbling experience. These women had dedicated a substantial part of their spare time to lobby for cycleways. By doing so, they hoped to effect better cycling conditions, better cities and more democratic spaces. But they found the experience incredibly trying. No one wanted to listen. One woman described the feeling of campaigning as standing in front of a vast “wall of officials”.

The interviews I carried out for my PhD reveal how much cities are primarily designing for cars. Technical officers, like transport planners and traffic engineers, reign supreme in our cities. They have remained unquestioned for much too long a time by local politicians. Activists have even less of a chance to contribute. I found that they met with a culture that held them at bay. New ideas – such as building cycleways – could not penetrate into council’s technical practice of designing for the car. This, to me, seems undemocratic. Beyond the opinion periodically expressed at the ballot box, just how could an interest group gain access to the decision making process?

In addition to this dysfunctional official system, the women I interviewed also came into conflict with older styles of cycle campaigning: the so-called “vehicular cyclists”. These cyclists denounce the need for cycleways, preferring to cycle on the road in vehicular traffic. They believe that cycling in 30mph motor traffic is desirable and that you are only a real cyclist if you mix with motor traffic. Such cyclists abhor cycling infrastructure.

Of course, individuals can do what they want. But such a perspective fails to challenge the status quo of prioritising the car. Planning cities around the car harms local democracy and well-being. It leaves little room to account for people’s realities and fails to focus on the public good.

A small number of cities have made headway in recent years. Seville, New York and London are such examples. As a result of strong local leaders, road space has been set aside and converted into cycleways.

But the need for strong leaders to enact such change again raises questions of the democratic process. Everyone knows that cycling is good for you. Cycling is contentious because campaigners demand physical changes to the roads – often at the expense of cars. And roads are political.

Katja Leyendecker is a PhD candidate in Northumbria University’s Department of Architecture and Built Environment. This article was originally published in The Conversation.