THE latest piece of Middlesbrough’s public poetry has been unveiled with its words celebrating the joys of city living.

The piece, Moving to the Country by Julia Darling, now adorns the side wall of Victoria House on Albert Road which has Baker Street Kitchen on the ground floor.

In it the writer talks of how people aspire for a rural life but eventually are relieved to be returning to urbanity.

We are always looking at for sale signs
down leafy lanes, imagining ourselves
freed from sirens, the clank of the city.
We try to see ourselves in fields
with large deep freezes, happily
wearing floppy hats, with secateurs.
We hope that we would fit in,
with our urban graces, our town shoes,
though the village people scowl
and have thick fingers, hang dead birds
from barbed wire fences.
We would try to trust the animals,
who seem so furious and dim.
We would ignore the crows,

that arrange themselves like omens.
We always end up driving home, relieved
full of scone, saying we would miss the cinema. 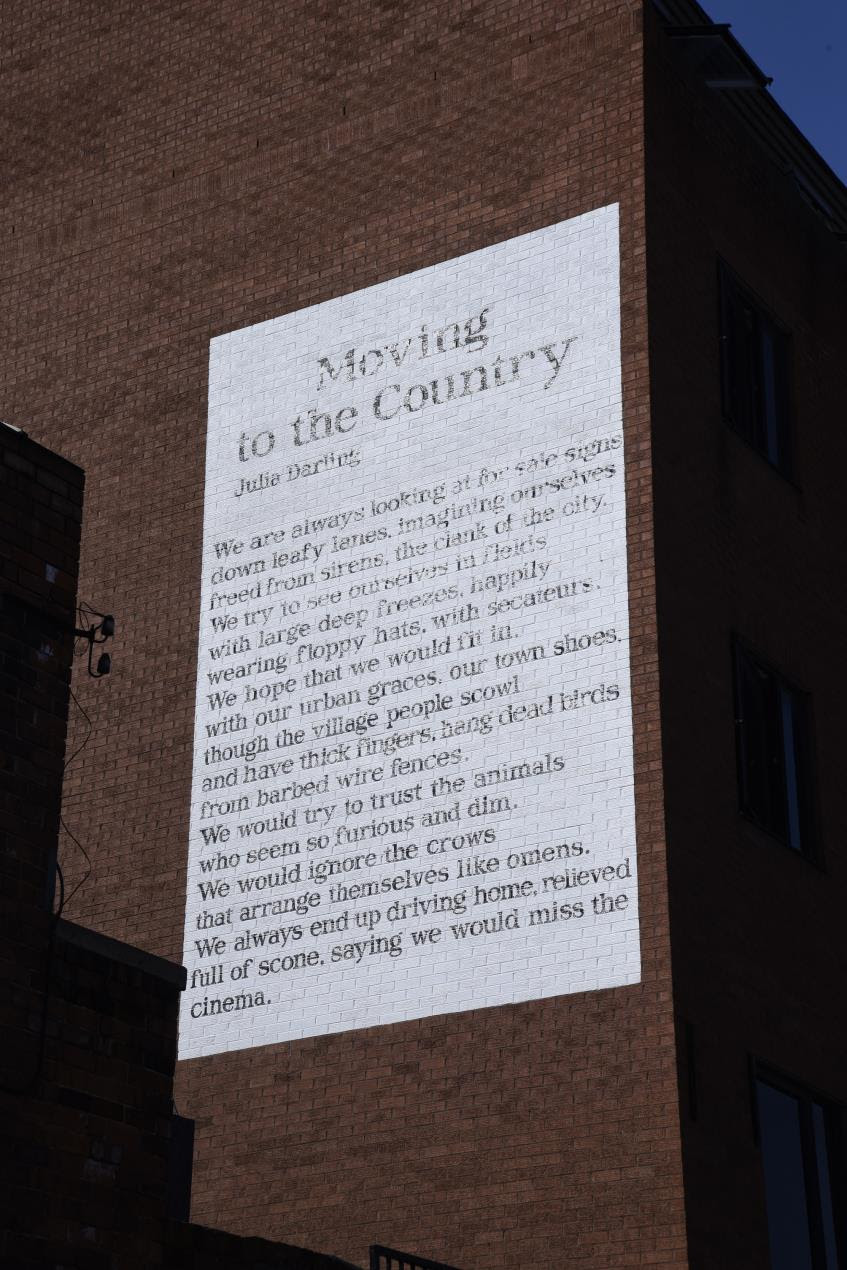 It is the fourth piece in the series of classic and contemporary literature popping up on sites around the centre of Middlesbrough including pieces by the likes of Arthur Conan Doyle, Miranda July and Simon Armitage.

Additionally, a special piece celebrating the words of “Voice of the Boro” Ali Brownlee has been created on the approach to Boro’s Riverside Stadium.

Cllr Mick Thompson, Middlesbrough Council’s Executive Member for Culture and Communities, said: “The Public Poetry project gives Middlesbrough something different and builds on all the positive things happening in our city centre at the moment.

“To have these pieces of work located around the Baker-Bedford Street area really helps tell the story of what Middlesbrough is about, a cultural hot-spot of the North East and home to the massively successful Orange Pip Market.

“We hope people, however busy, take a moment to read and take in these words and just enjoy that they are there.”

In late 2016 Middlesbrough Council unveiled the town’s first ever Investment Prospectus, with a clear focus on regeneration, enterprise and job creation.

The strategy aims to attract inward investment to the town of more than £600 million, with the creation of around 5,000 new jobs.

In addition, the project will be a valuable demonstration of the ambitions for the Tees Valley City of Culture bid in 2025.

Law firm on the move