Since ancient times, comets have fascinated sky-watchers, who often considered them divine omens. A Chinese historian recorded an apparition of Comet Halley as far back as 240 BC, describing it as a “broom star.” The Babylonians and Romans also referenced the comet’s appearance, but perhaps its most famous depiction is in the Bayeux Tapestry, which commemorates the Norman Conquest of England in 1066. The tapestry shows King Harold and a crowd of fearful Englishmen pointing to Comet Halley as it looms in the sky.

We now know that comets — which are clumps of rock, dirt, dust, and ice in space — are not harbingers of doom, but there is still much we don’t know about them. Because comets have changed very little in the solar system’s 4.6-billion-year history, they are among the most primitive bodies scientists can study. 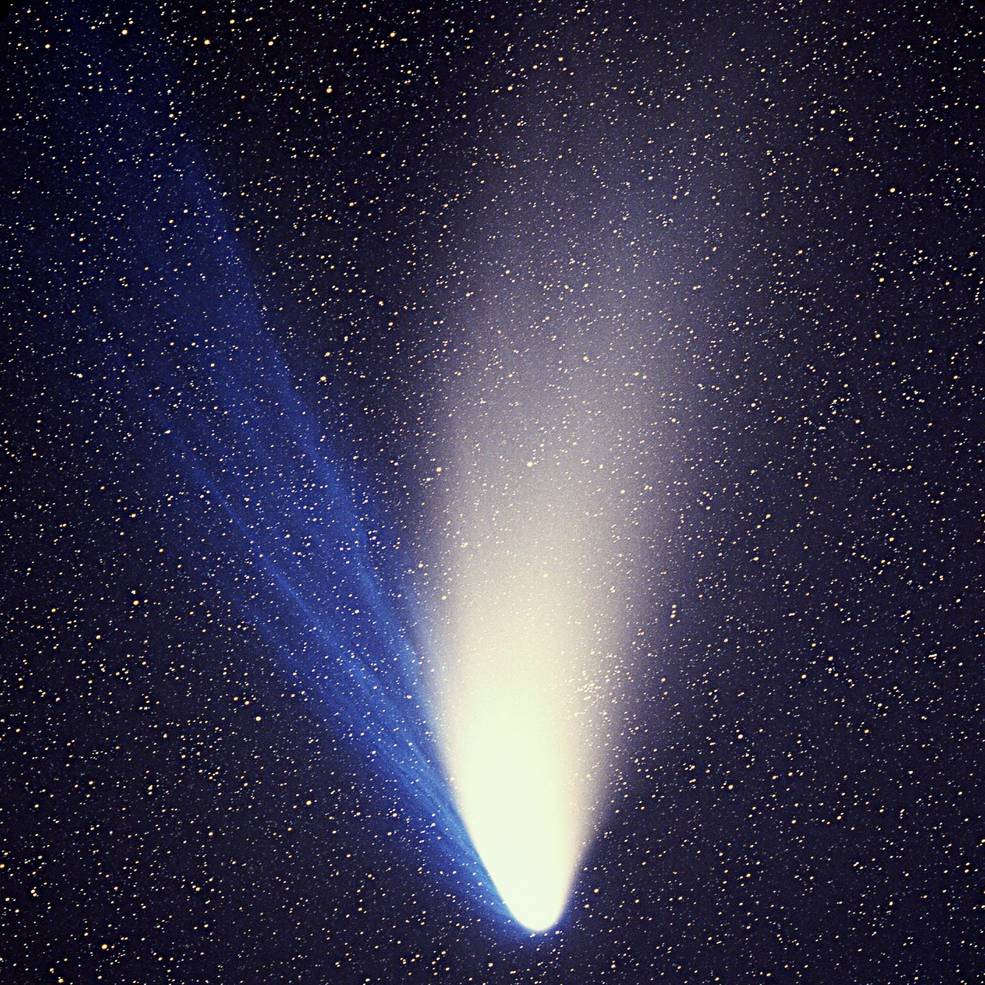 Scientists using Webb plan to observe a “target-of-opportunity” comet, one that is not yet known but is expected to be discovered in the first year of the telescope’s mission. If they are lucky, perhaps they might capture an interstellar comet, or perhaps they will train Webb on a comet similar to Hale–Bopp, shown above shortly after passing perihelion in April 1997. Comet Hale–Bopp, thought to be from the Oort Cloud, was one of the brightest comets seen for many decades. Visible to the naked eye for a record 18 months, it could be seen even from major cities with light-polluted skies.
Credits: E. Kolmhofer, H. Raab; Johannes-Kepler-Observatory, Linz, Austria (http://www.sternwarte.at). Available under Creative Commons CC-by-SA 3.0.

Shortly after its launch in 2021, NASA’s James Webb Space Telescope will observe three different types of comets in infrared light, which is invisible to human eyes. By learning more about comets, scientists can gain new insights into what the solar system was like billions of years ago.

These three comet studies will be conducted through Webb’s Guaranteed Time Observations (GTO) program of the solar system led by Heidi Hammel, a planetary scientist who was selected by NASA as a Webb Interdisciplinary Scientist in 2002. She is also executive vice president of the Association of Universities for Research in Astronomy (AURA) in Washington, D.C. Hammel’s program will demonstrate Webb’s capabilities for tracking moving targets and looking at bright objects in the solar system.

“We want to study comets with Webb because of the telescope’s very powerful capabilities in the near- and mid-infrared,” Hammel says. “What makes those wavelengths of light particularly powerful for cometary studies is that they allow us to study the chemical makeup of this dust and gas that’s come off of the comet’s nucleus and figure out what it is.”

Molecules of gas and dust emit and absorb infrared wavelengths of light, so by analyzing this light, Webb can determine which chemicals are present.

“If this is primitive material, it will give us some clues to the makeup of the early solar system,” Hammel says. 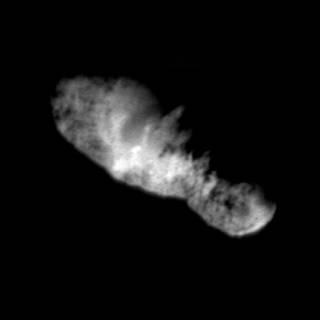 One of the comets the Webb team will study is Borrelly, a Jupiter-family comet. NASA’s Deep Space 1 spacecraft snapped this image of Borrelly’s icy, rocky nucleus in September 2001. The irregularly shaped nucleus is 8 kilometers, or 5 miles, long. While Webb will not see this level of detail, it will be able to measure molecular composition on the surface and sense variations as the object rotates.
Credits: NASA/JPL

When comets venture close to the Sun, some of their ice turns into vapor. This vapor forms an envelope, or coma, of gases and dust around the central body, or nucleus. The Sun’s solar wind and radiation pressure from sunlight stream this coma away from the nucleus, creating comet tails. The word “comet” comes from the Greek “kome,” which means “hair.” In ancient times, comets were thought to be stars with hair streaming off them.

Scientists using time from Hammel’s program plan to map the inner comae of three different types of comets, one of which has not yet been discovered:

“Oort Cloud comets are really long-period comets that approach the Sun very rarely, and they tend to have a lot more ice in them and a lot more volatile material,” explains Milam. “So they make these big, beautiful, bright comae.  They’re usually huge apparitions on the sky, and that’s what the focus would be for that comet.” Hammel notes that we aren’t quite sure what Webb would see for an interstellar object. “One of Webb’s strengths is its ability to sense faint objects, and that makes it a great tool to study these very rare and very faint interstellar interlopers. If we could glean compositional information about its surface, that might open a whole new field of study.”

Astronomers are not limited to just these objects.

“Ultimately, these are just individual examples, but over Webb’s lifetime, we’ll eventually observe many comets, and we’ll have lots of examples from these different classes, and we can compare them all to each other,” says Kelley. “With time — and in conjunction with all the ground-based data that we’ve had and will continue to obtain — we’ll have a better understanding of where these comets come from.”

Among the questions that scientists hope to answer with Webb: Are all solar system comets derived from a uniform population, and they’ve all just evolved differently? Or are they really chemically distinct from the start, and we’re just seeing that today? And, how do interstellar comets compare with local comets?

The James Webb Space Telescope will be the world’s premier space science observatory when it launches in 2021. Webb will solve mysteries in our solar system, look beyond to distant worlds around other stars, and probe the mysterious structures and origins of our universe and our place in it. Webb is an international program led by NASA with its partners, ESA (European Space Agency) and the Canadian Space Agency.

Illuminating the Gas Between Galaxies with Supercomputing

Chandra Spots a Mega-Cluster of Galaxies in the Making